A helping hand - Mark, who has a boil on his left knee, being carried upon arrival at the Siem Reap international airport.

KUCHING - Tears of joy and relief flowed when the Sarawakians released from detention in Cambodia were reunited with their families.

The 40, who were among 47 Malaysians detained in Cambodia's Banteay Meanchey province, arrived at Kuching International Airport from Siem Reap on a chartered flight yesterday.

Four others from Selangor and Kuala Lumpur flew from Siem Reap to KLIA2. 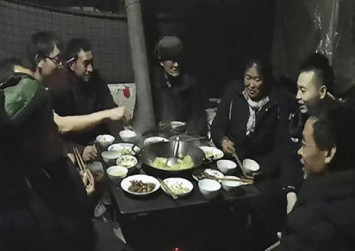 They were freed on Friday following talks between the Cambodian and Malaysian governments.

"I had been waiting since I found out she was detained and that the government was making efforts to help them.

"I was so happy when I heard that they had been released. Now that I have seen her with my own eyes, I am even happier," Marsita said.

Mark Rogers, 24, was carried off the plane onto a wheelchair as he has a boil on his left knee. He was sent to hospital for treatment.

His sister Maria Goretti, 33, said she was very relieved to see him back home safely.

She said Mark previously worked on the Pan-Borneo highway project in Kuching before going to Cambodia.

"He said he was leaving for a job with a friend but he didn't say where he was going.

"The last time he contacted me was at the end of November and I didn't hear from him after that.

"Then in February a friend came to the house late at night after watching the news about the detainees in Cambodia and asked if Mark was among them.

"I was surprised to find out that he was in Cambodia as I really had no idea he was there," Maria said.

Abdul Mustaqqim Abdul Karim said he was thankful to the state government and his father for his release.

"But when I got there, I discovered the job involved online gambling. I rejected it but we were kept closely guarded in a house," he said.

Nur Muhammad Arif Bokhari also said he received a job offer in a resort with a salary of US$1,200 via WeChat.

"The group was called Job Vacancy, so I don't know who the recruitment agent was," he said.

Fatimah thanked the Cambodian and Malaysian governments for facilitating the release of the detainees, adding that Special Duties Minister in the Cambodian Prime Minister's Department Datuk Othsman Hassan had been a big help.