ALOR SETAR - An eight-year-old girl died after being shot in the face with a shotgun handled by her cousin in her house in Pokok Sena near here.

Initial police investigations showed the cousin, aged 15, was preparing to go squirrel hunting with the firearm when it was said to have gone off.

Kota Setar OCPD Asst Comm Mohd Rozi Jidin said Puteri Intan Sharini Mohd Hishamuddin died from the gunshot to the left side of her face at 11am yesterday. 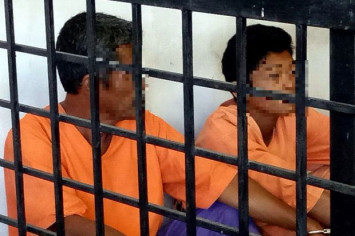 "Investigations showed she was lying down watching television at the living room when it happened.

"The girl's 50-year-old uncle and the cousin were at the house with the shotgun and getting ready to shoot squirrels.

"The cousin was holding the shotgun, which belongs to the uncle's 80-year-old father," ACP Mohd Rozi said.

He said the case has been classified as murder under Section 302 of the Penal Code.

"We arrested the uncle and cousin.

"The shotgun and its licence were seized. The licence is valid till next June," ACP Mohd Rozi added.

He said the girl's body was sent to Sultanah Bahiyah Hospital for a post-mortem.

It is learned that the victim had lived in her grandfather's house.

Her 26-year-old mother rushed there after hearing about the shooting.

"When I reached the house, I saw my daughter's face covered with blood and my mother cradling her.

"We were supposed to go and buy her new schooling items.

"I promised her we would go today," the mother cried.