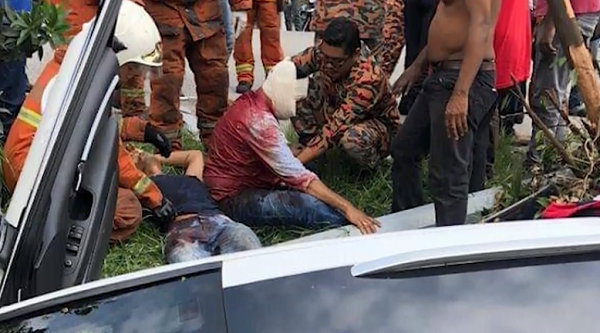 SHAH ALAM - A gymnasium owner was shot on his birthday by gunmen who opened fire at him and his worker at Jalan Kota Kemuning here.

In the 10.15am incident yesterday, the two victims, aged 40 and 43, were in a car on their way to buy lights for the gym when they were shot.

OCPD Asst Comm Baharudin Mat Taib said the gym owner was shot in the cheek while the worker, an Indonesian, in the stomach.

"Initially, we received calls from the public informing us that there was an accident.

"But when we arrived at the scene, we found out that a shooting had taken place," he told reporters when met at the scene.

ACP Baharudin said initial investigations showed that several gunmen in a four-wheel-drive drove up to the driver's side of the car and opened fire with a semi-automatic pistol.

Police believe that the gunmen fired at least seven shots.

Both victims were warded at the Hospital Tengku Ampuan Rahimah in Klang in stable condition.