Rights groups have accused Malaysian immigration authorities of causing the deaths of 149 Indonesian citizens who were subjected to allegedly brutal conditions while held at detention depots over the past 18 months.

In a report titled Like in Hell, Indonesian NGOs said there was a gross lack of concern for the well-being of detainees from officers in charge of the facilities in the state of Sabah on Malaysian Borneo, where up to 260 people - including children - were allegedly squeezed into windowless cells about the size of a badminton court, equipped with just three toilet bowls.

In one instance, depot officers had allegedly left a detainee named Nathan, who had Down syndrome and was in his 40s, to die by offering no health support even though he had been sick for an extended period, according to Abu Mufakhir, an activist with Koalisi Migran Buruh Berdaulat, or Coalition of Sovereign Migrant Workers, which prepared the report.

"Several times the officers made light of Nathan's condition by saying 'you can still hang on right?', and only giving him [Paracetamol]," Abu said at the launch of the report over the weekend in Sabah.

Nathan died at the Tawau detention centre in March. The cause of death was not stated in his death certificate.

The death toll cited in the report was based on data provided to the Coalition of Sovereign Migrant Workers by Malaysia's embassy in Jakarta, which reported 2,191 deportations between January 2021 to June 24 this year.

Abu said another detainee, Aris bin Siang, died in September at the Tawau centre after allegedly being denied medical treatment, despite having lost consciousness several times during his six months in detention.

"Six per cent of those detained died. This is not something that can happen in a normal setting," Abu said of the death toll.

"No clean water, the food is atrocious, how can people not die when they only get two to three hours of sleep a day?"

Officials with the immigration department did not immediately respond to a request for comments.

The NGO also highlighted an outbreak of scabies among the detainees, similar to the situation reported by Malaysian news portal Malaysiakini on Chinese nationals detained in Johor who developed "boils and skin ulcers" - including on their genitals - which did not subside even five months after being released.

The Indonesian report claimed that when detainees asked immigration officers for medication, they were mockingly told to bring their hands to their chest and start scratching, saying: "There, that's the cure."

Commenting on the alleged inhumane treatment by Malaysian officers, Dinda Nuur Annisaa Yura from Solidaritas Perempuan (Women's Solidarity) said it was akin to colonial-era attitudes where detainees were not just punished, but "dominated".

"From here we see a paradigm, a perspective that does not see these detainees as humans," said Dinda.

Malaysia's Home Ministry, which oversees the immigration department and its operations, has since 2019 barred outside access to the country's detention centres, including to the UNHCR, the United Nations' refugee agency.

Tom Andrews, the UN Special Rapporteur on the situation in Myanmar, said in his recent visit to Malaysia that he was denied access to the depots to meet Myanmar refugees there, and was left with no response to several letters sent to the Home Ministry seeking a meeting.

"I am deeply concerned about reports that hundreds of children may be in these facilities, including child victims of trafficking. Children should never be placed in migration detention facilities," Andrews had said.

Rohingya refugees in depots near the national capital of Kuala Lumpur also raised similar complaints about their treatment while in detention, which largely corresponded with what the Coalition of Sovereign Migrant Workers published in its report. 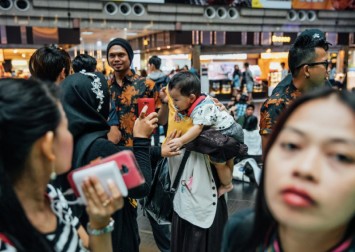 Rohingya refugee Abdul Qahhar, who was detained for two years, said the detainees were only allowed one set of clothes throughout their time at the depot.

"I saw one person beaten up by immigration officers for having two T-shirts," he said when contacted.

Earlier this year, allegedly appalling conditions at a detention centre in the northern state of Kedah sparked a riot that led to over 520 people breaking out of the facility.

While most were recaptured, six - including two children - were killed while attempting to cross a six-lane highway.

"Malaysian authorities in the past believe that whipping detainees will deter those who enter the country without documents," said Jerald, who was a panel speaker at the launch of the Coalition's report.

Activist Abu Mufakhir suggested that while it was easy for Malaysia to provide clean running water and adequate toilet in the depots, immigration officials employed these "dramatic" acts instead as a deterrent.

"They create these conditions to create terror, so when the detainees are released they will go back and tell others about it," he said.

Of the 94 deportees who contributed to the NGO's report about their detention in Sabah, one woman said there were two hells: "One in the afterlife, the other in this world, at the temporary detention centres in Sabah."