Malaysian MP offers RM10,000 reward for info on MRT robber who beat up woman in lift

PETALING JAYA - A reward of RM10,000 (S$3,325) has been offered to anyone with credible information on the person who assaulted a woman inside a lift at an MRT station in Cheras last Thursday (Feb 14).

Kepong MP Lim Lip Eng said in a statement on Sunday (Feb 17) that his office is offering the RM10,000 bounty.

"The police have yet to identify the assailant. It is hoped that the cash offer will lead to the robber's arrest immediately.

"My biggest fear is that if he is not caught soon, his actions may influence other villains to commit such crimes in a similar fashion in lifts, or in obscure corners all over the country," said Mr Lim. 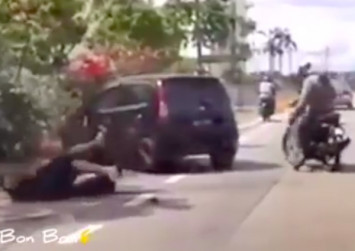 The incident last Thursday prompted the Kuala Lumpur police to set up a 200-strong task force to apprehend the criminal.

The 48-year-old woman suffered multiple injuries, including bruises on her forehead, after the savage attack on Valentine's Day.

A closed-circuit television recording shows the woman entering the lift, followed by the man.

The moment the lift doors close, the man lands a powerful right hook on the side of the woman's head, which floors her instantly.

He punches her several more times and drags her across the floor, before grabbing her handbag. The woman attempts to hold on to it, triggering another flurry of punches and kicks by the man.

愤怒无名氏通过民主行动党甲洞区国会议员林立迎林立迎，悬赏1万令吉缉拿捷运站电梯匪徒。My office offers a bounty of RM10,000 on behalf of an outraged anonymous for...

The lift doors then open at one of the station's floors. The man pins the woman to the side of the elevator, standing still so as not to attract attention while waiting for the doors to close again.

As the doors shut, the man kicks and punches the woman several more times, and even beats her with her own bag.

As the lift moves down a floor, the woman attempts to stand - but is quickly kicked and punched. The woman appears to beg the man to return her handbag, stretching her hands towards him, as he ransacks her belongings.

When lift doors open at another floor, the man drops the bag after having fished out the woman's wallet and charges out of the elevator. Seemingly dazed by now, his victim slowly walks out of the lift.