“We are definitely disappointed with the decision made by Dr Mahathir not to be with us in our struggle as decided by the supreme council.

“Dr Mahathir and his followers decided to cooperate with Pakatan (Harapan) despite the party’s decision against it. If that is Dr Mahathir’s decision, I wish him all the best."

He added in a press release on Saturday (May 30) that Mahathir Mohamad and his supporters were not sacked from Bersatu. 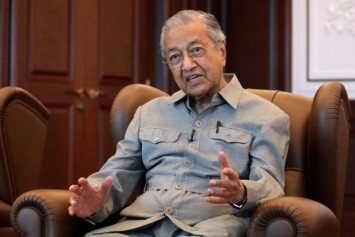 Instead, Muhyiddin said the party memberships of the five were nullified because they went against the party’s direction.

In urging calm among Bersatu members, Muhyiddin said he has never made a hasty decision over the matter, although he was pressured by many people to take action against the five.

“I want to be fair to everyone and make sure that any action taken must be based on the party’s constitution.

“No one is above the party constitution, ” he said.

The reason given for their membership termination was that they had sat in the Opposition bench during the May 18 Dewan Rakyat sitting.

The letter by Suhaimi said that the five were sacked according to Clause 10.2.2 sand 10.2.3 of the Bersatu party constitution.

According to Sections 10.2.2 and 10.2.3, the membership of a member will be terminated automatically through the actions of announcing their exit from the party and partaking or joining as a member of any other political party in the country.

In a letter by the Registrar of Societies dated May 5, it said that Dr Mahathir is no longer the party chairman, following his resignation as party chairman and prime minister on Feb 24.

However, Dr Mahathir, in a press conference on Friday (May 29), maintained that he is still the chairman of the party and that he wanted to sack Muhyiddin from Bersatu.