Malaysian police beefing up security in wake of IS threats 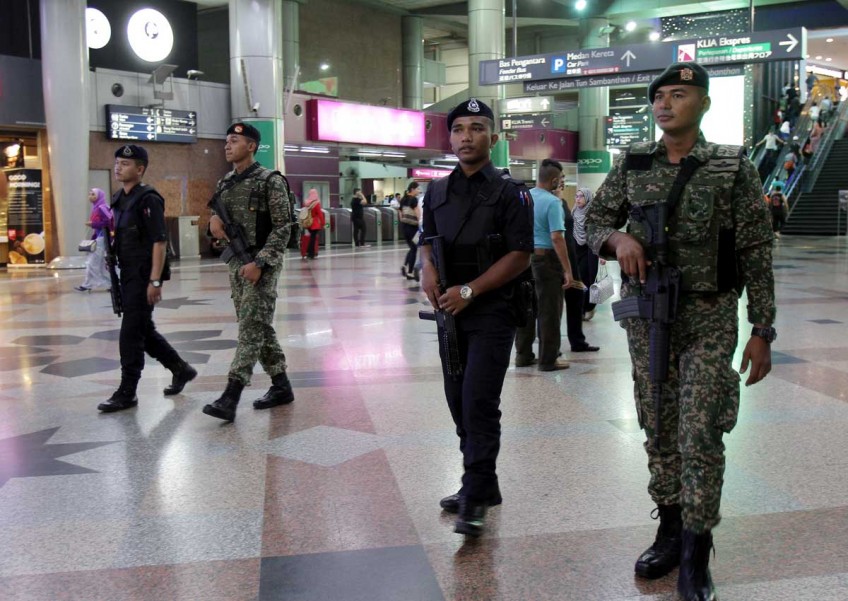 Police and army officers patroling at Kuala Lumpur Sentral railway station amid the tighter security measures following the grenade attack at a nightspot in Puchong which was linked to the Islamic State in Iraq and Syria (ISIS) group.
The Star/ANN

Khalid said police presence had been increased at public locations, including shopping malls.

"We are stepping up our presence and security at places with large congregations of people.

"It is a precautionary measure to ensure the safety of all," he told reporters during the Special Branch Department's Hari Raya open house yesterday.

On threats issued by IS directed towards top police officers, Khalid said he had heard of it.

"However, I already expected all this as leader in charge of the nation's security.

"It is nothing new to us and there is no need to be so concerned about it," he said.

The country's top cop also dismissed the IS pledge of setting up a nusantara regime involving several countries, including Malaysia, Indonesia and the Philippines.

"They can claim anything they want but our priority is the security of our country and the people," he said.

On the proposed security measures for airports, Khalid said police had already given their input to Transport Minister Datuk Seri Liow Tiong Lai.

On the bombing at the Movida nightclub, Khalid said more arrests had been made but refused to elaborate.

"We will issue a statement soon," he said.

Last month, IS was responsible for the grenade attack at the Movida Kitchen, Bar & Club Lounge in Puchong .

Khalid said the attack carried out by two men at the nightspot was the first strike by the terror group in Malaysia.

The 2.15am blast at the nightspot left eight people wounded.

The two attackers escaped on a motorcycle.