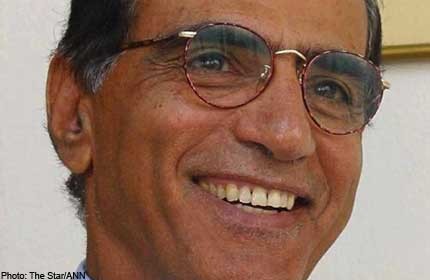 KUALA LUMPUR - The main suspect in the murder of Arab-Malaysian Development Bank's first managing director and chief executive officer Hussain Ahmad Najadi is believed to have changed his appearance to escape the law.

City Criminal Investigation Department chief Datuk Ku Chin Wah said the 44-year-old gunman, who is still at large, has shaved off his moustache to avoid detection but is still in the country.

He warned that those who have information on the man's whereabouts but do not inform police would run afoul of the law.

"(People withholding information on a suspect) can be charged under Section 212 of the Penal Code for harbouring an offender.

"They could be jailed between a year and 10 years if convicted."

Ku said four people detained to facilitate investigations -- a 44-year-old cabbie who ferried Hussain's killer, a 42-year-old man and two women aged 47 and 61 -- were under remand until Aug 17 and Aug 19.

On July 29, 75-year-old Hussain was shot dead and his wife, Chong Mei Kuen, 49, wounded when a gunman shot at them.

The couple had been walking towards their car after discussing a property deal at a Chinese temple in Lorong Ceylon when the incident occurred. Investigations led to the arrest of the first suspect, the taxi driver, on the day of the incident.

On Aug 5, the second and third suspects were picked up at the temple in Lorong Ceylon while the fourth suspect surrendered at the Kuala Lumpur police headquarters later that day.