KUALA LUMPUR - City police will call several members of the management of the Pudu Integrated Commercial Complex (ICC Pudu) to have their statements taken, following the death of two elderly women during a free food promotion programme.

The women died after they were caught in a group of at least 1,000 people rushing to collect free food coupons during a Chinese New Year event at the complex on Monday (Jan 28).

City police chief Comm Datuk Seri Mazlan Lazim said although the incident was classified as sudden death, they were investigating to ascertain if there was negligence involved.

"We need to investigate what preparations were made prior to the coupon giveaway.

"We were not informed of the management's plans," he told reporters at the City police headquarters here on Tuesday (Jan 29). 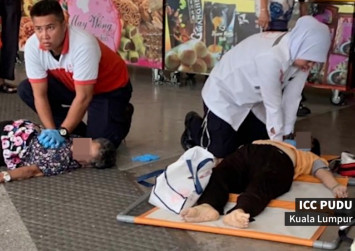 Comm Mazlan said many of those who turned up for the coupons were the elderly.

"The post-mortem report will shed more light on the cause of death of the two women.

"We are waiting for the report. The bodies of the two women have also been claimed by their respective families," he said.

It was reported that the victims, identified as Ah Poh, 85, and Law Ion Nang, 78, died after being critically injured in a rush for free food coupons when more than a 1,000 people dashed for just 200 free meals.

The free buffet meals were meant to be taken by Feb 11, in conjunction with the Chinese New Year festivities, but a huge crowd scrambled for the coupons at the hawker centre.