Malaysian voters reminded of PAS 'cruelty' during its rule 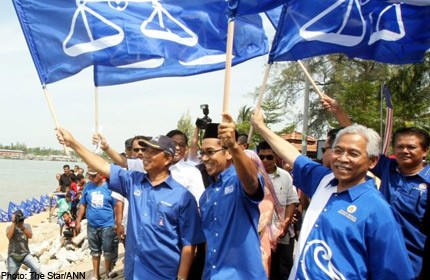 BESUT - The voters in Kuala Besut have been urged to reject PAS to enable the coming generation to benefit from the various development and education projects initiated by the Barisan Nasional Govern­ment.

In making the call, Communication and Multimedia Minister Datuk Seri Ahmad Shabery Cheek reminded the voters of PAS' failure to bring development when it wrested control of the state government after the 1999 general election.

"When they (PAS) were given the opportunity to rule Terengganu, they did nothing. They did not build mosques, madrasah, religious schools or roads at that time.

"Remember how cruel they were when they chased away kindergarten pupils from schools throughout Terengganu," said Ahmad Shabery, who is also Kemaman MP.

He said voters should ensure PAS did not return to power as the party might misuse the facilities provided by the Government, especially schools and community halls.

Meanwhile, Deputy Prime Minister Tan Sri Muhyiddin Yassin said the people in both urban and rural areas could rest assured that the "responsible and caring" Barisan Government would address their concerns.

Speaking at a gathering for Kuala Besut fishermen, he said a project to deepen the Kuala Besut river estuary was one of the many efforts taken by the Government to improve the people's livelihoods.

Once completed, fishermen would be able to go to sea without having to wait for high tide to be over.

The project would also help develop the local tourism industry by allowing tour operators to use bigger boats to ferry tourists to the nearby Perhentian Island.

Muhyiddin said that when he informed Datuk Seri Najib Tun Razak that the RM250mil project was crucial to the fishermen, the Prime Minister said the Government would find the money for it.

Muhyiddin said the Government had also approved RM35mil for another project in the constituency to upgrade the dam at Pengkalan Nangka.

He said that once the project was completed, farmers working on some 90ha of land in the area could plant padi twice a year like their counterparts in Kedah and Selangor.

Muhyiddin said these two projects would have a significant multiplier economic effect and urged the community to grab the opportunity to improve their livelihoods.

"This is our commitment to the people of Kuala Besut so that they can use the facilities to improve their lives," he said.

He said it was fitting that Barisan candidate Tengku Zaihan Che Ku Abd Rahman was an engineer as he would be able to oversee the completion of the two projects if elected.