As the rest of the world celebrated Valentine's Day on Monday (Feb 14), the air of romance was somewhat marred in Malaysia after a government minister stirred controversy by suggesting husbands had a right to use a "gentle but firm physical touch" on their "undisciplined and stubborn wives".

The remarks by Siti Zailah Mohd Yusoff, the Deputy Minister of Women, Family and Community Development, was the latest instance of a government official coming under fire for perpetuating what some activists say is an entrenched culture of misogyny in parts of the country.

Commenters on social media said the hardline Islamist political party that Siti Zailah is part of, the Parti Islam SeMalaysia (Pas), had a long track record of platforming these views.

In an Instagram video posted on Saturday as part of a series on "tips for mothers", Siti Zailah said that under Islam it was permissible for a husband to hit his wife if she engaged in untoward behaviour even after being told not to do so, and after the husband signalled his displeasure by "sleeping separately from her".

"If she remains undisciplined, then he can engage in physical touch that is gentle, educating, full of love, that does not hurt but shows firmness," said Siti Zailah in the two-minute video.

On Monday, a collective of 11 leading local women's rights groups including Sisters in Islam and the Women's Aid Organisation in a statement urged the 58-year-old deputy minister to resign immediately over remarks they said were "grossly in error and a demonstration of failed leadership".

"As a minister who is meant to uphold gender equality and the rights of women to protection and safety, this is abhorrent, denies women the right to equality, their right to dignity and to be free from degrading treatment," the Joint Action Group for Gender Equality said in their statement.

"The deputy minister must step down for normalising domestic violence, which is a crime in Malaysia as well as for perpetuating ideas and behaviours that are opposed to gender equality," the groups said.

i have question, aside from the topic and the ridiculous advice, she speak as a minister kan. which means for all races supposedly? so why the video with the zikr background? is she working as an ustazah or a minister? https://t.co/NnXjlG8LrD

Online, some commenters noted that while Siti Zailah's remarks were made on the basis of Islamic teachings, the reality was that she was normalising a notion that was highly subjective.

"Please ask her to demonstrate how men should use 'gentle but firm physical touch' to reprimand their wives," asked Siti Zailah's predecessor, Hannah Yeoh, who described the deputy minister's videos on the topic as "dangerous".

While advocating men to be physical towards their "stubborn" wives, Siti Zailah's remedy for wives facing errant husbands is to surrender to the divine, telling women to "pray to God". 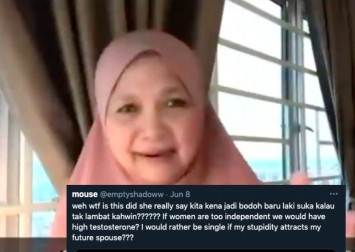 Describing the advice as an example of the infantilisation of women, women's rights advocate Shafiqah Othman said that the deputy minister's advice appeared to justify and contribute to domestic violence and abuse.

"Men are allowed to use 'gentle but firm' physical touch on problematic wives, but wives can only pray for problematic husbands?" Shafiqah asked, adding that tactics like these were only used in relationships where one viewed their partner as lesser than them.

Fellow lawmaker Nurul Izzah Anwar - daughter of opposition leader Anwar Ibrahim - noted that domestic violence against women has been on the rise throughout the Covid-19 pandemic with over 9,015 cases recorded.

"This so-called 'advice' by the deputy minister is a disservice and goes against current realities and needs," Nurul Izzah said.

The unmistakable Islamic preacher style of Siti Zailah's videos was widely noticed by the public who questioned whether she sees herself as a preacher or a minister.

"[She should] read the government's domestic abuse statistics and try to resonate with the lived realities, or resign," said extremism and conflict studies analyst Aizat Shamsuddin, who also underscored that Siti Zailah's primary role was that of deputy minister in the federal government.

Siti Zailah hails from the rural constituency of Rantau Panjang in the state of Kelantan - the heartland of her Islamist party - and is no stranger to similar controversies.

Her first order of business following her appointment to her current portfolio in March 2020, was mooting a law to compel female Muslim flight attendants to dress in a sharia-compliant manner.

In 2014, following the tragic downing of the Malaysia Airlines Flight 17 over Ukrainian airspace, Siti Zailah suggested the incident was a result of divine wrath that arose due to the airline's un-Islamic dress code and practice of serving alcohol.

While initially focusing on the dress code of flight attendants, she later remarked that the law be mandated on everyone in the private sector as well as sports athletes, citing it was what Islam decreed.

Aside from Siti Zailah, her current boss - Rina Harun, the Minister of Women, Family and Community Development - has also recently been in the news over comments that critics said infantilised women.

In 2020, the ministry said women should avoid nagging their husbands. Instead, they were advised to imitate "the tone of Doraemon followed by cute laughs" as a way to deal with their husbands during disagreements.

The message was part of an online public relations campaign on ways to avoid domestic arguments during the Covid-19 partial lockdowns that were in place in the country.

The message was widely panned after going viral at home and overseas and was taken down following a public apology by the ministry.