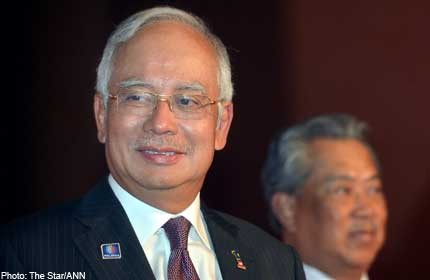 MALAYSIA - Is the government of Prime Minister Najib Razak in a funk?

As the government marks its 100th day in office, with no major policy direction having been announced, that is the question being asked by many Malaysians.

The silence - coming amid a spate of violent crime, rising religious tension and a stubborn Budget deficit - stands in stark contrast to the situation four years ago when Datuk Seri Najib took the reins from Tun Abdullah Badawi.

During his first days in office in April 2009, portraying himself as a reformist leader, Mr Najib lifted bans on two opposition newspapers, Harakah and Suara Keadilan, and released 13 prisoners held under the Internal Security Act, a tough security law that Parliament has since repealed.

In July 2009, as his first Cabinet racked up 100 days in office, he introduced toll discounts for frequent users of highways, halved licence renewal fees for hawkers and increased the number of taxi permits.

He laid out broad plans for the public - pledges to combat crime and corruption, raise education standards, improve infrastructure in East Malaysia - winning plaudits from many Malaysians.

On Friday, that can-do spark seems to be missing, say politicians and analysts.

On Friday marks 100 days in office for Mr Najib and his 31 Cabinet ministers and 25 deputy ministers, who were sworn in on May16.

Some say he is still smarting from Barisan Nasional's weak victory at the May general election. It won 133 of 222 seats in Parliament, seven fewer than in 2008, and lost the popular vote.

"Najib's Cabinet will need more than 100 days to settle in because of the aftershocks still being felt," said Dr Syed Arabi Idid, dean of the communications department at the International Islamic University Malaysia.

Others say the cautious mood is due to the upcoming Umno elections in October, with the Premier unwilling to make moves that might alienate supporters as he defends the party's presidency.

The opposition gave him a failing grade for his first 100 days.

"Najib has been too preoccupied with defending his position in the Umno party elections, to the extent that there has been no clear direction in economic, political or nation-building policies," said MP Anthony Loke, national organising secretary of the Democratic Action Party.

There has been talk about deputy president Muhyiddin Yassin, who is also Deputy Prime Minister, challenging Mr Najib for the party presidency, but several divisional leaders said it would not happen.

"I don't see signs of Muhyiddin challenging Najib at this point as it could damage the party," said Mr Ramli Yunus, an Umno division secretary in Kedah. There is certainly no shortage of items for Mr Najib's to-do list.

Violent crime is up around the country. Earlier this month, a prominent banker was gunned down while walking in the city centre in daylight, just two days after an anti-crime activist was shot and critically injured in his car.

Religious feelings are also raw after an ethnic Chinese couple posted an online Ramadan greeting featuring a popular pork dish, even as controversy continued to rage over the use of the word "Allah" by non-Muslims.

Malaysia is into its 16th year of spending more than it earns. Narrowing the Budget deficit would involve unpopular measures such as cutting subsidies for sugar and other items, and introducing a goods and services tax (GST).

Given Mr Najib's relative reticence of late, his newly appointed Cabinet members have stepped in to try to steer the country, amid heightened expectations of probity and fiscal responsibility.

Government officials say Mr Najib remains committed to his reform agenda. This week, even as Home Minister Zahid Hamidi and some Umno leaders called for a return of the tough Emergency Ordinance law against gangsters, the Prime Minister said he was not in favour of bringing back detention without trial.

"It's still a work in progress and I am happy he has received a mandate to carry it out," said Mr Khairy.

A former president of Transparency International Malaysia, an anti-corruption NGO, Datuk Low knows in-depth what is needed to reduce graft. But making statements from the outside is different from fixing it from within the government.

A big challenge for the Minister in the Prime Minister's Department is to get buy-in from government ministries for his graft-busting plans, which include stricter oversight of government procurements.

Umno's rising star from Sabah has a tough portfolio. Most urban voters rejected the Barisan Nasional government at the May general election, in part due to the high cost of living and fast-rising housing prices.

The other part of Datuk Abdul Rahman's portfolio, Local Government, is overseeing town councils, including thankless tasks such as ensuring regular rubbish collection. It is a key position to improve BN's standing among demanding urbanites.

He was one of the leaders of Hindu Rights Action Force (Hindraf), which organised a huge rally against the government to highlight the plight of the Indian community in November 2007. Three days later he fled to England in self-imposed exile as other Hindraf leaders were arrested. He returned to Malaysia in August last year and just before the May elections publicly endorsed PM Najib.

Mr Waythamoothy is now Deputy Minister in the Prime Minister's Department, a controversial appointment as the Malaysian Indian Congress has long been the main voice of the community in BN. Some in Umno also feel that the rebel has no place in Putrajaya.

He is from Parti Pesaka Bumiputera Bersatu, BN's strongest component party in East Malaysia. The Works Minister is a senior ministerial post and an acknowledgment by PM Najib of the importance of Sabah and Sarawak to the BN. The new appointment also points to government plans for more roads and highways for East Malaysia.