Finance Minister Lim Guan Eng said after gathering feedback from Malaysians, the government decided to extend the collection period for another two weeks, from Dec 31 to Jan 14.

PETALING JAYA - Tabung Harapan Malaysia, a fund started by the Malaysian government to collect money from the public to help pay the national debt, has officially closed after eight months.

Finance Minister Lim Guan Eng said all donations made after that date will be returned to contributors.

"The amount from this contribution will be used for the federal government's debt repayment," Mr Lim said in a statement yesterday. "The Finance Ministry is in the process of adjusting the closure of the account before auditing is carried out by the Auditor-General's Department."

Soon after taking power in the May general election last year, the Pakatan Harapan (PH) government started the fund so that the public could help pay the national debt totalling RM1 trillion. This was higher than the figure announced by the previous administration.

Donations to Tabung Harapan or the Hope Fund, came from members of the public and corporations. 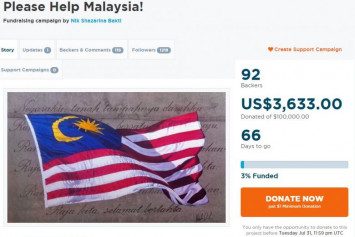 Last June, then Malaysian King Sultan Muhammad V of Kelantan offered to reduce his allowance and emoluments by 10 per cent until the end of his reign to help reduce the national debt burden.

This followed a move by federal ministers led by Prime Minister Mahathir Mohamad to take a 10 per cent pay cut, in a symbolic gesture of austerity.

"The federal government extends its highest appreciation to all Malaysians who have contributed," Mr Lim said.

"Their contribution reflects their loyalty to and love of our beloved country. In addition, it gives encouragement to the government to work hard to resolve the debt-inherited problems of the federal government."

A committee chaired by Treasury secretary-general Ahmad Badri Mohd Zahir will determine how the contributions will be channelled, in accordance with the procedures set out in Tabung Harapan's trust deed account. This would ensure that the fund's management is organised with integrity, said Mr Lim.