White flags could be seen flying outside homes and poverty relief organisations across Malaysia this past week as citizens cried out for food and other assistance amid the country's latest Covid-19 lockdown.

The surreal scenes, reminiscent of similar protests that swept the South American nations of Guatemala and El Salvador last year, emerged from a grass-roots social media campaign centred on the #benderaputih (white flag) hashtag that began trending on Monday.

Community organisers told This Week in Asia the campaign was the clearest sign yet of the economic despair that hundreds of thousands of Malaysia's lower-income families have experienced amid the haphazard approach of Prime Minister Muhyiddin Yassin's government to the public health crisis.

The 74-year-old leader announced a fresh set of stimulus measures earlier this week to soften the blow of a "total lockdown" first imposed on June 1 that will now stay in place until the country's daily caseload falls below 4,000, the official Bernama news agency cited him as saying.

Included in the 150 billion ringgit (S$48.5 billion) package were direct cash transfers to low- and middle- income groups, with the country's poorest households set to receive some 1,300 ringgit each.

To the dismay of community organisers, however, the first tranche of government aid will not be disbursed until August, even though many require immediate help. Underscoring the urgency has been an apparent uptick in suicides, with police revealing on July 1 that 468 people had taken their own lives in Malaysia over the first five months of the year - compared to 631 in the whole of 2020 and 609 the year before.

Shortages have become so severe in some Malaysian households that pregnant mothers have been subsisting on just one meal per day, forgoing food so that their other children have enough to eat, said Jean Vaneisha of youth advocacy group Challenger, which was involved in the white flag campaign.

Celebrities and supermarkets have responded to the #benderaputih call with offers of help, and crowdfunding efforts aimed at feeding the needy have also been launched, including by opposition lawmakers.

MPs aligned with Muhyiddin's ruling Perikatan Nasional alliance have access to more funds for helping their constituents than those in opposition - a policy that has been decried as antithetical to the government's pleas for unity in the midst of a crisis. 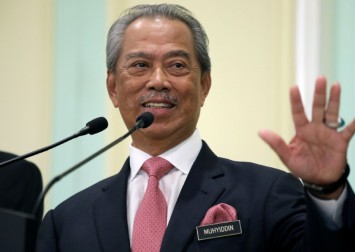 Critics have also blasted Muhyiddin and his lieutenants for prioritising staying in power over people's livelihoods, amid accusations the government has been brainstorming ways of further delaying a looming no-confidence vote. Efforts to launch the measure were stymied in January by the declaration of a national emergency that suspended the country's parliament, but that order is set to expire on August 1.

Kelvin Yii, an MP of the opposition Pakatan Harapan coalition for Bandar Kuching in Sarawak, criticised the government for not acting quickly enough to counter economic despair despite being able to rule by fiat since the emergency began.

He said Muhyiddin's announcement of fresh economic aid would be of little immediate help as "the cash will only arrive in August" while in the meantime "people are actually already suffering and dying".

His constituents had managed to weather earlier lockdowns by raiding their savings, Yii said, but with no end in sight to the crisis, a "sense of hopelessness" was creeping in - especially among poorer neighbourhoods.

"They say they don't know what to do next as they are not allowed to work," Yii said, adding that the current national lockdown appeared to be ineffective and unscientific.

Wong Chin Huat, a political scientist from the Jeffrey Sachs Centre on Sustainable Development at Malaysia's Sunway University, said many Malaysians had become disillusioned with the lockdown that was first imposed as cases began surging in May. And a lack of clarity over which sectors of the economy are allowed to stay open is just part of the reason.

"The daily new infection figure remaining at around 5,000 and the indefinite extension of the lockdown means that the sacrifice in closure of business and shortage of income will not be rewarded with relief down the road," Wong said.

"This strengthens the public perception that the government is simply incompetent. To add insult to injury, government politicians and well-connected people continue to flaunt [movement restrictions] and are going unpunished, leading many to believe this is a 'dual-class' society."

Hartini Zainuddin, co-founder of Yayasan Chow Kit - a group that distributes food and other help to the needy in one of Kuala Lumpur's poorer districts - said it was important to "let people help" each other with initiatives such as the #benderaputih campaign, especially when lives depended on it.

Yet some politicians such as Nik Abduh Nik Abdul Aziz have hit out at the campaign on social media, comparing it to an admission of defeat in the face of the pandemic.

In a June 29 Facebook post, the Malaysian Islamic Party (PAS) member - who is politically aligned with the ruling administration - urged those in need to "raise your hand in prayer to God", adding "that is the flag of strength and optimism in the test of life. Don't admit defeat when being tested".

His comments sparked a backlash, with many pointing to the resilience Malaysians had already shown in weathering a mismanaged health crisis.

Further social media scorn was heaped on Zuraida Kamaruddin, a minister in Muhyiddin's Cabinet, when she took to Twitter to express her supposed support for the #benderaputih campaign.

"Ministers have power, are in the cabinet. Use those powers so the people don't have to wave white flags," said Syahredzan Johan, a member of the opposition Democratic Action Party, in response.

Wong, the political scientist, said it was difficult to forecast what might lay ahead for Malaysia now that the extent of economic despair had been exposed by the white flag campaign.

"How do you balance between economy and health, and weigh between which groups to help? These are not easy questions," he said. "Sadly, not only does the prime minister appear not to have [answers], his political contenders such as opposition leader Anwar Ibrahim and foreign minister Hishammuddin Hussein also have not offered concrete alternatives."