Malaysians will be escorted by frontliners to their family members at the burial site.

PETALING JAYA - Malaysians in Singapore are allowed to return to Malaysia to attend the funerals of their respective immediate family members without having to undergo the mandatory 14-day quarantine period as it is considered an emergency.

Those who return are allowed to be at the burial ceremony only for a maximum of three hours and they have to be clad in full personal protective equipment (PPE), Malaysia's Senior Minister (Security) Ismail Sabri Yaakob said on Tuesday (May 26).

"They will be escorted by front-liners to their family members at the burial site for a maximum of three hours," he said during his daily briefing on the country's conditional movement control order. "After that, they will be sent back to Singapore."

Datuk Seri Ismail Sabri said this was in line with present standard operating procedures and that such cases had happened before.

But whether or not they would be subjected to quarantine upon their return to Singapore is the prerogative of Singapore's authorities, he added.

"It's up to Singapore itself when they return," he said. 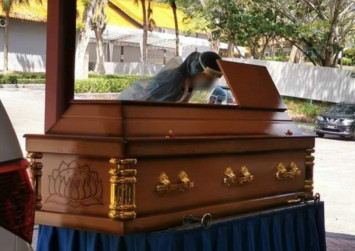 Previously, the Malaysian High Commission in Singapore was reported as saying that it was ready to assist a Malaysian woman bus captain who had made a heartfelt plea to return home for her husband's funeral in a viral clip.

In the video clip, the woman, who was behind the wheels of a bus, was inconsolable upon hearing news of her husband's demise and could not continue driving.

She stopped her bus at a bus stop and was crying uncontrollably before she was assisted by bystanders.

The Singaporean bus operator, Tower Transit, has since told Bernama in an e-mail reply that it is currently giving her support to go through this period.