A worker sprays disinfectant on a woman during the movement control order due to the outbreak of the coronavirus disease, in Kuala Lumpur, Malaysia, on April 1, 2020.

PETALING JAYA - As the implementation of the recovery movement control order (MCO) enters its second week, members of the public are beginning to take fewer precautions and flouting rules outlined by the National Security Council (MKN) and Health Ministry, which exposes the nation to the risk of another wave of local Covid-19 transmissions.

Observations conducted at public areas such as eateries and shopping centres saw many people disobeying the standard operating procedure (SOP) by failing to register either by scanning the QR code or writing down contact details, and not maintaining social distancing.

Senior Minister Datuk Seri Ismail Sabri Yaakob has warned that the authorities will continue to issue compounds to those violating the SOP under the recovery MCO.

Under the previous phase of restriction, which was a conditional movement control order (MCO), violators ranged from those attending night soirees at bars and entertainment outlets and party-goers carousing in apartments to youths loitering at the beach and even some VIPs enjoying durian at a stall.

Some 470 individuals were detained on the first day of Hari Raya Aidilfitri for not following the SOP under the conditional MCO, with the public getting house visits from the police.

Public places and business premises that are now allowed to reopen are being monitored and under scrutiny by local law enforcers to ensure that they adhere to the SOP.

As of Monday, a total of 63 individuals were detained for defying the recovery MCO and 56 of them were involved in activities at pubs, nightclubs and reflexology centres.

Seven others participated in activities that disobeyed social distancing rules.

Between April 20 and June 14,17 construction sites were ordered to shut down over compliance failure while in Seberang Prai, its local city council reported on June 13 that only 15 per cent of barbershops and hair salons in the city were adhering to the SOP.

Businesses that are still not allowed to operate include pubs, nightclubs, entertainment centres, reflexology centres, karaoke centres and theme parks. 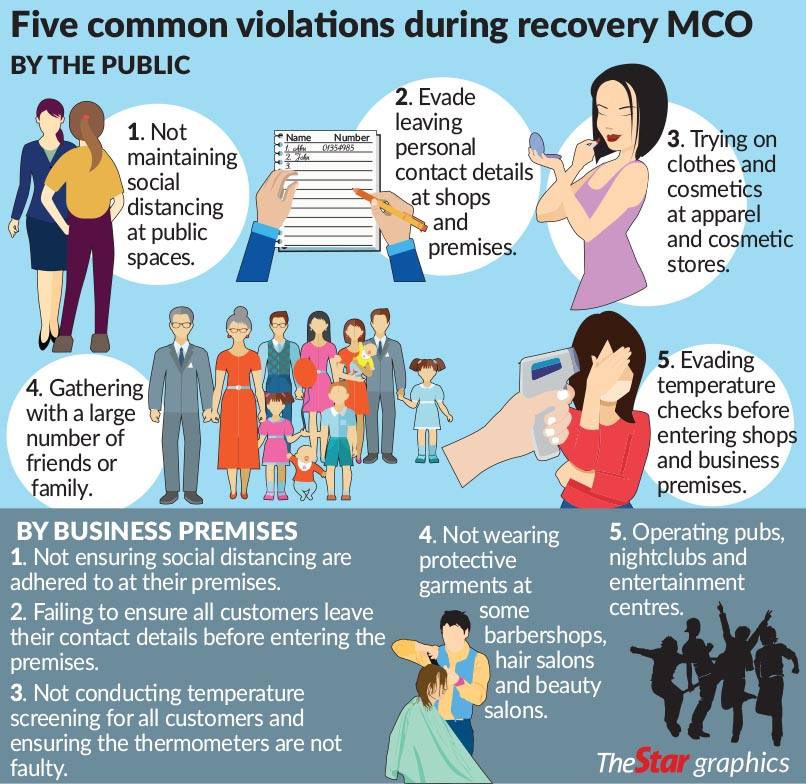 A partner at an artificial intelligence cloud company, Sarina Sundara Rajah, said she had seen violations of SOP where shops and food stalls at a mall in Kuala Lumpur had allowed people to enter without registering their contact information nor did they provide the MySejahtera system for people entering the premises.

“I only share information via MySejahtera for privacy and not all restaurants or shops have it, although it takes less than five minutes to generate the QR code.

“When complaints are made via the MKN hotline, there were different interpretations of the SOP that people should follow,” she said.

Restaurant owner Mohammad Adib Mohd Khairi said that although his shop put up notices on social distancing and implemented temperature checks, it was difficult to control the crowd. 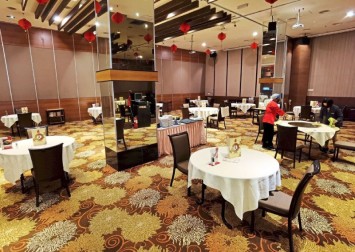 “We have limited staff and during peak hours, everyone is needed to run operations so it is hard to ensure customers practise social distancing.

“The restaurant only recently opened up dine-in service but we limit the number of customers and encourage takeaways to reduce numbers in the premises,” he said.

While some businesses said they were struggling to maintain the SOP as the crowd size increased, other establishments failed to implement industry-specific restrictions.

Housewife Diyanah Zainuddin said she was not aware of the SOP that cosmetics shops were not allowed to provide testers to customers during this period and there were such samples on the shelves in the cosmetics section of a pharmacy she visited.

“I am only aware of the rule that clothes shops do not allow customers to try on the items, but I saw a few shoppers trying on the pieces over their own attire,” she said.

As gyms have been allowed to open since June 15, Sarina finds it troubling that the gym she goes to are asking people who come in to wear masks during their workout.

“This poses a serious risk to people’s health and can cause severe harm due to the lack of oxygen during workout,” the 2001 SEA Games gold medallist said.

She said business and sports premises should strictly follow the SOP and not add their own regulation that might be detrimental to people’s safety and health. 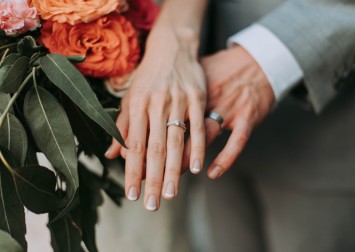 Indoor sports venues and snooker centres had also been allowed to resume operations from June 15.

The National Security Council (MKN) released the latest SOP on Tuesday for the operation of public transportation, cinemas and mosques as well as for the running of government and private events.

Meetings, seminars, training workshops and lectures are allowed to be held for less than 250 participants who have to go through health screening before being allowed to enter, as well as ensuring social distancing while queuing.

All participants must also be registered on MySejahtera besides registering with the organisers.

Children under 12 years old and senior citizens aged above 60 are not allowed to enter any such events.

Meanwhile, activities at mosques and surau are allowed to resume with a maximum of one-third of the hall’s capacity, as well as enforcing social distancing. The people are also reminded to avoid shaking anyone’s hands.

Those commuting on buses are also required to wear a face mask at all times and bus drivers are allowed to refuse entry to anyone with Covid-19 symptoms.