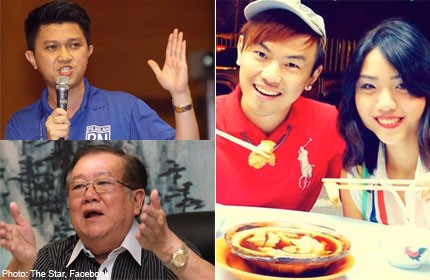 PETALING JAYA: Malaysians have come together to condemn sex bloggers Alvin Tan and Vivian Lee for posting a racially sensitive picture on their joint Facebook page, describing their latest antic as "stupid".

They also called for the couple to take down the picture immediately and apologise to all Muslims.

MCA Youth central committee member Chong Sin Woon said the act was a "serious insult" to Muslims and he did not know whether the couple was doing it deliberately or were simply naive about Muslim community sensitivities.

"If their purpose is to draw attention, then they have chosen the wrong platform, occasion and reason to do so," he said and called for them to remove the picture as it was nothing to be proud about.

The picture, which was uploaded on Thursday night, depicted the couple eating bak kut teh and describing it as 'wangi, enak, menyelerakan' (fragrant, delicious, appetising).

However, the post has earned over 1,000 comments, mostly chiding the couple for their insensitivity.

"They uploaded the picture despite knowing the sensitivities involved. What are they trying to prove? It gives the Chinese community a bad name," he said.

United Youth Movement of Malaysia president Low Eng Tack speculated that this might be the couple's way of generating publicity for themselves. He said the actions of the two set a bad example to youths.

"Matters related to race and religion are sensitive and they should know their limits," he said.

He called on the public not to share the picture.

MCMC Strategic Communications advisor Sheikh Raffie Abd Rahman said they had received complaints about the offensive picture and was currently investigating the matter under Section 211 and Section 233 of the Communications and Multimedia Act 1998, which deals with offensive content and improper use of network facilities respectively.

When contacted, Tan confirmed they posted the greeting for "no reason. Just a joke, I guess".

When asked if he regretted the posting, Tan said "not yet... Yeah, in a way. I don't know. I was just curious to see how people will perceive it. It seems not everybody is on the same page as us. It is dark humour. It is just our attempt to see how it will be perceived. It is just trying to be humorous on the matter," he said.

To him, the unfavourable response showed that "people don't see the humour, people are mostly angry and upset".

Tan added he would probably take the picture down, but "by now, many have shared the picture."