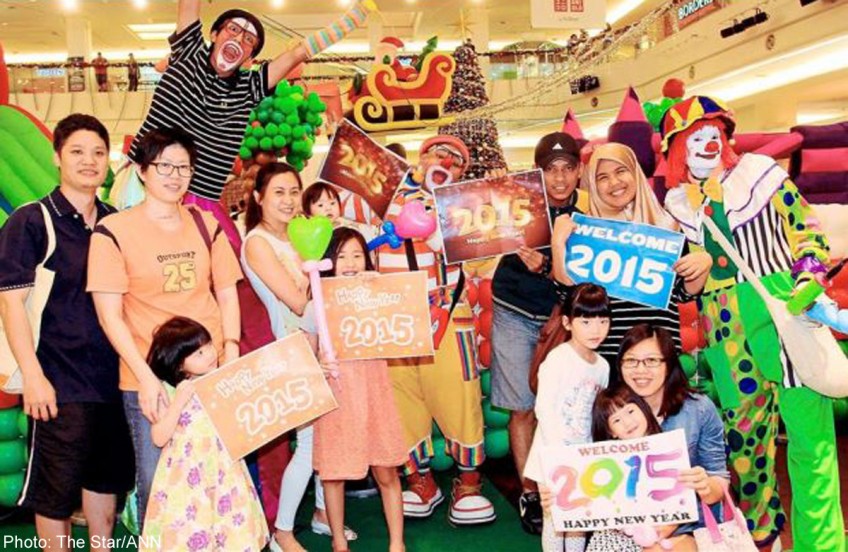 Smiles all around: The crowd at Tropicana city Mall holding 2015 placards during the New Year’s Eve celebration.

KUALA LUMPUR: The celebrations to welcome 2015 were carried out in a more muted manner following the massive floods which hit several states in Malaysia and the crash involving the Indonesia AirAsia flight.

Thousands of people gathered at the KLCC Park to watch the music, light and sound show as they were entertained by Akademi Fantasia winners Stacy and Ewal, as well as violinist Dennis Lau.

A donation campaign was also held there from 6pm onwards for the flood victims.

In George Town, many organisers cancelled their annual fireworks display.

Instead, they organised charitable events in a show of compassion and sympathy for both flood victims and families of passengers onboard Indonesia AirAsia QZ8501.

At the Esplanade, artistes performing at the Penang Golden New Year's Eve Countdown Celebration urged the public to give generously as Malaysian Red Crescent Society (MRCS) members moved among the crowd with donation boxes.

As a well as a counter set up for aid, event organiser CreatiVision and the MRCS followed a group of cyclists, led by co-organiser G-Club Penang Cyclists, to gather essential items at three collection points.

At the Gurney Paragon Mall, a six-hour countdown marathon paused midway for revellers to observe a minute of silence for the families and friends of those onboard Flight QZ8501.

In Johor Baru, the celebration at Dataran Bandaraya here was turned into a prayer session out of respect for the victims of the flood disaster and airplane mishap.

The Johor Baru City Council and the state Islamic Council conducted the special prayers with Johoreans for a better 2015.

Mayor Datuk Abdul Rahman Dewam hoped 2015 would be filled with happier and more prosperous development for the state and Malaysia as a whole.

"Out of respect for the victims of the flood and the Indonesia AirAsia tragedy, this New Year's Eve was celebrated on a quieter scale.

"We hope everybody affected can remain resolute in this difficult time," he said in his speech.

The event was also to celebrate the 21st anniversary of the declaration of Johor Baru as a city.

[[nid:163895]]
SUBSCRIBE TO OUR NEWSLETTER
Your daily good stuff - AsiaOne stories delivered straight to your inbox