A Vaccinated Travel Lane (VTL) bus plies the causeway between Singapore and Malaysia, as it reopens after nearly two years amidst the coronavirus disease (Covid-19) pandemic, Singapore, on Nov 29, 2021.

As Malaysians and Singaporeans are reconnected after two years, the reopened land crossings have not just reunited loved ones and reinvigorated cross-border tourism, but also fuelled a fresh wave of bickering between the two neighbours, which share a sibling-like rivalry.

Due to the strong Singapore dollar, nearby Johor Bahru has long been a favourite day trip destination for many Singaporeans, who make up a crucial part of the Malaysian city’s retail and F&B sectors.

But residents of Johor Bahru, which is a half-hour drive from Singapore, say they have often had to put up with the idiosyncrasies of their southern neighbours, including behaviour they say is opportunistic, or even obnoxious.

These complaints resurfaced on April 1 when the land crossings reopened, after which Malaysians said Singaporean motorists were once again seizing the chance to fill up their petrol tanks with cheaper petrol.

Singapore bars local vehicles from entering Malaysia with less than three-quarters of a full tank, but some motorists ignore the rule – and risk a fine – by crossing the Causeway and Second Link with far less than the permitted level.

In Johor Bahru, some Singaporeans have also been seen buying RON-95 petrol – which is subsidised by the Malaysian state and meant to be sold only to residents.

RON-95, which is identified by its bright yellow nozzles at petrol kiosks, currently costs about (9.30 ringgit) (S$3.00) per litre in Singapore compared to 2.05 ringgit (66 Singapore cents) per litre in Malaysia.

Images of Singaporeans using these pumps went viral on social media this week, irking Malaysian residents and prompting the authorities to warn petrol station operators that they risked a 2 million ringgit fine for selling RON-95 petrol to foreign-registered vehicles.

Azman Adam, enforcement director at the Domestic Trade and Consumer Affairs Ministry, said on Tuesday that officials had so far received seven formal complaints over the matter.

Other reports and images have shown Singapore car owners in Johor Bahru vigorously shaking their car while topping up petrol – a practice some motorists believe allows for them to fill their fuel tanks to the brim.

So disgruntled over the matter, scandal-haunted former prime minister Najib Razak weighed in, saying every cent of petrol pumped by Singaporean motorists was costing the Malaysian taxpayer.

Najib’s government had banned foreign-registered vehicles, including those from Thailand and Brunei, from accessing subsidised RON-95 fuel during his 2009-2018 tenure.

“If a foreigner pumps just 40 litres of RON95 fuel, the government will lose 68 ringgit of the people’s money to foreigners,” said Najib, citing that the government had subsidised 1.70 ringgit for every litre of that grade of fuel.

Away from the pumps, Malaysians say some Singaporean drivers have also been taking part in racing and dangerous driving on the country’s roads.

In a 41-second video that went viral on Sunday, a convoy of several BMWs were seen speeding, tailgating, and performing illegal overtaking on a trunk road in Johor, much to the chagrin of the Malaysian public.

“These drivers are putting other road users in danger for their own ‘fun’,” said commenter Isaiah Thong.

Others questioned if Singaporean motorists would be as brazen in breaking traffic rules on home turf, given the tough penalties and enforcement on the island state. Some also expressed disappointment with Malaysian authorities for a seemingly lackadaisical attitude towards collecting traffic fines.

“If we get a summons in Singapore we can’t leave [the country] before settling it. Why can’t Malaysia do the same?,” another commenter Mat Taib said.

Yana Zulkarnain, a Johor Bahru resident, who previously told This Week in Asia she was unenthused about the border reopening, said the chatter over the last week had validated her concerns. “We really don’t look forward to it, it’s a much more hectic place with the border open,” said Yana, 36. 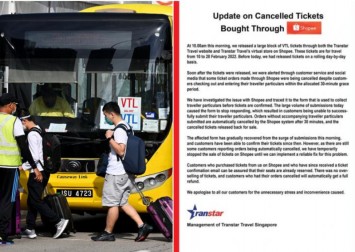 But even as Malaysian citizens remained vexed over the behaviour of certain Singaporean visitors, some used it as fodder for fresh jibes against their neighbours.

“Singaporeans filling up on government subsidised (fuel) whilst in Malaysia is like Malaysians throwing cigarette butts in rubbish bins whilst in Singapore – we are just ‘respecting’ each other’s culture,” quipped Malaysian comedian Harith Iskander, referencing the city state’s strict anti-littering laws.

Kuala Lumpur bicycle shop owner Azfar Mutalib referred to the perpetual warnings Singaporeans make to each other about the “dangers” of Johor Bahru, including claims of carjackings and other crimes.

“In the end, it is ‘kiasu’ Singaporeans who rob our subsidised petrol!” said Azfar on Facebook, using the colloquial Hokkien term to denote a “fear of losing” that is evoked to reflect the Singaporean psyche.

Others said Singaporeans’ paranoia about crime in Johor Bahru was a good reason for them to stay away.

“Yes, we do have robbery and murder cases here. Please don’t come here,” Facebook user Sofea Mija said in a thread on the topic.

Meanwhile, some Singaporeans have also criticised the actions of their compatriots, imploring them to behave better.

“No matter how much money you spend in JB, remember that we are guests in Malaysia,” wrote Singapore history scholar Dhevarajan Devadas on Twitter. “Don’t abuse their hospitality and fuel subsidies.”

At its peak, the Causeway and Second Link were used by about 400,000 daily, making the land borders one of the world’s busiest crossings. The Causeway was built in 1924, while the Second Link connecting Singapore’s Tuas region to Johor’s Tanjung Kupang area was opened in 1998.

The Causeway remains the most striking symbol of the deep historic, economic and social ties between the two countries, which split in 1965 after a brief union following British colonial rule.