Malaysia’s opposition leader Anwar Ibrahim on Friday criticised a purported plan by the government to suspend parliament and rule by decree in the midst of surging coronavirus cases, saying the move would herald “dictatorship and authoritarianism”, as reports swirled that embattled Prime Minister Muhyiddin Yassin﻿ was manoeuvring to gain emergency powers.

Other critics too slammed the ruling Perikatan Nasional alliance for seeking to suspend the legislature as an underhanded means to avoid an embarrassing no-confidence vote defeat.

Following a meeting with his ministers and the country’s police and defence chiefs in the morning, local media reported that Muhyiddin called on Sultan Abdullah Sultan Ahmad Shah in the monarch’s home state of Pahang for a two-hour meeting.

Reuters, citing anonymous sources, reported that Muhyiddin had sought a state of emergency that would suspend parliament. The sources did not give a reason for the request.

There was no immediate comment from the prime minister’s office following his meeting with the constitutional monarch.

In a statement released during the prime minister’s meeting with the king, Anwar pointed out that a “state of emergency is declared when there is a threat to our national security”.

“But when the government is itself the source of that threat then a state of emergency is nothing more than a descent into dictatorship and authoritarianism,” the 73-year-old leader of the Pakatan Harapan opposition alliance said. “I strongly advise Tan Sri Muhyiddin to consider the legacy of these actions he is taking out of self interest and selfishness.”

The dramatic developments, the latest in Malaysia’s year of roller coaster politics, comes ahead of a parliament sitting on November 2, with next year’s budget proposal slated to be tabled four days later.

Speculation had been mounting for weeks that the budget bill could be defeated, as the opposition has been courting some MPs in Muhyiddin’s camp to defect and bring about a collapse of the government.

Under Malaysia’s constitution, a state of emergency can be declared by the king – on the advice of the prime minister – if the monarch is satisfied that there is an imminent danger to the “security, economic life or public order” of the nation.

Awang Azman Awang Pawi, a political scientist with the University of Malaya, said the public was likely to view any likely emergency declaration as a means by Muhyiddin to “save his position as prime minister and avoid the pressures brought by certain parties that want to overthrow him”.

The veteran political observer said if the government was granted the special powers it meant the 2021 budget would pass without the approval of parliament.

Power literally can’t get more centralised than it already is and there are already no limits to Perikatan Nasional’s power. - Nalini Elumalai, civil activist

On social media, the prime minister was excoriated for the reported plan, with many questioning why the measure was needed when existing laws allowed for tightened pandemic-control measures without the suspension of parliament.

Amid burgeoning Covid-19 cases, the government last week reimposed partial lockdown measures in Kuala Lumpur, the administrative capital Putrajaya, and surrounding Selangor state. The Southeast Asian country underwent a strict nationwide lockdown from March to May, before the measures were gradually eased.

“Declaring emergency just to stay in power? Please don’t use the welfare of the people as your mask because that’s the last thing you care [about],” wrote Yeo Bee Yin, an opposition lawmaker and former cabinet minister.

Charles Santiago, a third-term opposition MP, warned that an emergency would wreak havoc on citizens’ lives. “Businesses are collapsing. If an emergency is declared, vulnerable communities will likely starve to death. Business confidence will drop,” the Democratic Action Party lawmaker said in a statement.

Civil activist Nalini Elumalai, also writing on Twitter, said: “[Perikatan Nasional] government declaring a state of emergency would be the dirtiest political move ever. Power literally can’t get more centralised than it already is and there are already no limits to Perikatan Nasional’s power.”

Malaysia is in the midst of a third wave of the novel coronavirus, with more than half of the nearly 23,000 total caseload occurring in October.

The source of the latest wave has been widely attributed to the lack of social-distancing measures observed by politicians during campaigning ahead of polls in the state of Sabah on September 26.

Muhyiddin, head of the Perikatan Nasional coalition that came to power in March following a messy back room coup in the previous government, had in recent weeks been battling to stave off an effort by Anwar to remove him by inducing defections of MPs. 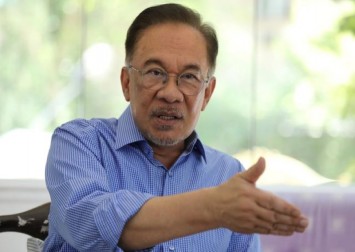 The situation had appeared to have been defused this week, as the United Malays National Organisation (Umno) – a key component of the ruling alliance – unilaterally declared a “political ceasefire”.

The party, which ruled Malaysia from 1957 to 2018 and remains its biggest political organisation, had been eyeing cooperation with Anwar, leader of the alliance that was ousted in the March political coup.

He had claimed in September that his plot would allow him to form a “strong, formidable, convincing” government in place of the ruling alliance – which has a two-seat legislative majority.

A declaration of a nationwide emergency would mark the first time such action is taken since racial riots in 1969. The government at the time suspended parliament and established a National Operations Council that ruled by fiat for two years.