Malaysia's new Prime Minister Anwar Ibrahim on Monday (Dec 5) said he did not order police to investigate his critics for challenging him and his administration, as authorities hauled up at least one of his rivals for questioning in an apparent crackdown on incendiary comments in the aftermath of a deeply divisive general election.

Racial and religiously tinged rhetoric and content spread on social media in the weeks leading to the Nov 19 election.

Much of it was aimed at convincing the majority Malay-Muslim voters that they risked losing their status and privileges to the minority ethnic Chinese and non-Malay community if Anwar's Pakatan Harapan (PH) coalition were to form the government.

Anwar said whatever investigations launched by police and other enforcement agencies were guided by the recent statement from the Malay royal rulers, who called on all Malaysians to avoid playing up racial sentiments and religious extremism.

"The instruction came from the Malay rulers, to abide by the spirit of the constitution. This cannot be equated to [a crackdown on] criticism of the prime minister or of the government," Anwar said after chairing his first cabinet meeting.

"I even informed the inspector-general of police that criticism of the prime minister or government, in a democratic system, is allowed. Likewise, I will use the [democratic] space to respond as and when necessary."

Police had summoned Abdul Hadi Awang, president of the Pan-Malaysian Islamic Party (PAS), for questioning on Monday, after several police reports were lodged against the senior cleric.

It was unclear what the complaints against Abdul Hadi were about, though his lawyers said he was being investigated under Section 505 of the Penal Code, which covers statements that could cause public mischief, and Section 233 of the Communication and Multimedia Act for communications intended to threaten or harass an individual.

"I gave my full co-operation… it looks like this government is very proactive. I ask that they also expedite investigations on others in PH who touched on Muslim matters," Abdul Hadi said after the questioning.

On Twitter, he wrote that the police report was made by the leadership of the Democratic Action Party (DAP), the predominantly Chinese party in PH that won 40 seats in the November 19 polls.

He wrote that the DAP and PH were "angry" with his assertions that the now-governing alliance included members who were communists, LGBTQ people and "anti-Islam".

In the days after the polls ended, authorities had warned of a rise in ethnic tensions on social media, as Anwar's coalition and rivals Perikatan Nasional (PN) raced to secure enough support to earn the right to rule for the next five years.

Some of the contentious content included video clips on the deadly May 13, 1969 racial riots that were reportedly promoted as sponsored content on TikTok. 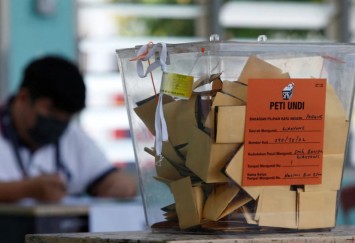 The country's police and cyberspace watchdogs have since launched investigations into the spread of the allegedly provocative content.

Anwar and his administration have also been regular targets on social media, spurred on by statements from PN leaders questioning PH's anti-corruption credentials after cutting a deal with the corruption-tainted Barisan Nasional alliance to secure the numbers to form a government.

PN is the second-largest bloc with 73 out of the 222 seats in parliament, riding on an unprecedented performance by its largest constituent PAS.

PAS' early adoption of social media platforms, particularly TikTok, was a key tool in swinging young and undecided voters to their side, analysts said.