Malaysia’s opposition leader Anwar Ibrahim on Tuesday urged citizens to exercise “patience and wisdom” as the king deliberates on the next steps on the veteran politician’s much-debated plan to oust Prime Minister Muhyiddin Yassin and form a new administration through defections of government MPs.

“We are not pressing him for any prompt decisions,” Anwar said after the 25-minute meeting, where he claimed to have submitted documents proving he had support for his leadership bid.

The country’s constitutional monarch, Sultan Abdullah Sultan Ahmad Shah, meanwhile appeared to contradict Anwar in a separate statement, saying that Anwar did not furnish a list of MP names to him during their meeting.

The statement, released by the Comptroller of the Royal Household, said the monarch told Anwar to abide by the constitution, and emphasised the need to prioritise dealing with the Covid-19 pandemic.

Malaysia is currently experiencing a new surge in cases, with the capital area and surrounding Selangor state going into a two-week partial lockdown starting on Wednesday.

Both the king and Anwar’s remarks, following the highly-anticipated tête-à-tête, effectively rules out the likelihood that a change of government will take place imminently.

“I would appeal to Malaysians to exercise patience and wisdom and to allow the king to decide based on the constitution and the discretion of His Highness,” Anwar said in a press conference after the meeting.

But nonetheless, the 73-year-old opposition leader reiterated he had garnered “convincing support” in parliament, and that Muhyiddin’s six-month administration had collapsed on account of the defections.

Anwar said he had “extended an olive branch” to the prime minister through emissaries. In the 15-minute press conference, Anwar repeatedly said any decision about a power transition ultimately lay in the hands of the king, given his constitutional prerogative powers.

The monarch will next consult other party leaders, Anwar said. 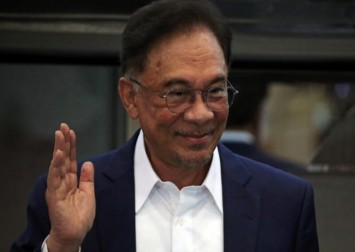 The leader of the Pakatan Harapan alliance earlier did not speak to the media as he left the National Palace, even as his vehicle was briefly surrounded by dozens of reporters. His convoy had arrived at the lush royal residence half an hour earlier, at about 11am.

Anwar’s audience with the king came three weeks after he stunned the country with a public declaration that he had obtained majority parliamentary support to oust Muhyiddin.

He did not reveal who was backing him, but said he would form a “strong, formidable, convincing” administration, in contrast to the fragile two-seat majority that Muhyiddin has in the 222-seat parliament.

Local media reports have said Anwar has the backing of up to 22 MPs from the United Malays National Organisation (Umno), the former ruling party that Muhyiddin in February joined forces with to topple Pakatan Harapan, then led by the elder statesman and former prime minister Mahathir Mohamad.

If Anwar succeeds in securing the post, he would be Malaysia’s third prime minister this year.

Sultan Abdullah, whose assent is constitutionally required for any transition of power, was unable to meet Anwar at the time of his announcement on Sept 24 as he had been convalescing after falling ill. 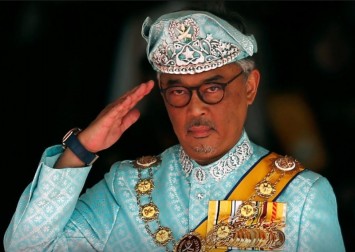 Upon the monarch’s discharge from hospital, Anwar last week announced the meeting was scheduled for Tuesday. The palace has not commented on the meeting.

Earlier on Monday, Anwar’s camp urged supporters not to gather. Aides did not say if the opposition leader would hold a press conference.

Meanwhile, some Umno MPs over the weekend filed police reports alleging mischief on the part of Anwar’s camp in linking them to the bid to oust Muhyiddin.

Scepticism has been rife over Anwar’s plan, with many online comparing it to his claim in 2008 that he had a majority to topple then-Prime Minister Abdullah Ahmad Badawi.

The move later fell flat as members of Umno – the main political force in the country from 1957 to 2018 – failed to defect.