Walk the line: Authorities continue to keep tabs on foreign workers amid calls for proper testing protocols for specific industrial sectors and amnesty for untested illegals.

PETALING JAYA - Construction industry players are appealing to the government to create a proper Covid-19 testing protocol for each sector to ease worker bottlenecks.

Real Estate and Housing Developers' Association Malaysia (Rehda) president Datuk Soam Heng Choon said he estimated there were about 400,000 to 500,000 foreign workers in Kuala Lumpur and Selangor registered under Socso who wanted to get tested.

"It is crucial to set up a clear protocol on which sectors should get tested first as there are limited labs.

"This will also clear the long queue of those eager to come back to work, " he said when contacted.

The government had announced that all foreign workers were required to undergo Covid-19 tests.

Senior Minister Datuk Seri Ismail Sabri Yaakob said this was decided after the rise in Covid-19 cases in the country over the past few days - most involving foreign workers.

Soam said the government should prioritise testing based on the country's critical economic requirements."The government has the data to determine the protocol and they can decide which sectors should be tested first, " he added.

"Some foreign workers have booked appointments but could not get a date yet. They were told to wait until after Hari Raya.

"Some already did the tests but the results were not out despite having waited for over 10 days, " he said.

He said that about 460,000 foreign workers in the construction sector wanted to go for the test.

"Some of them are paid daily wages and have no permanent employers. They have not worked in the last two months, " he said.

Foo urged the government to identify undocumented foreign workers and get them to undergo Covid-19 testing. 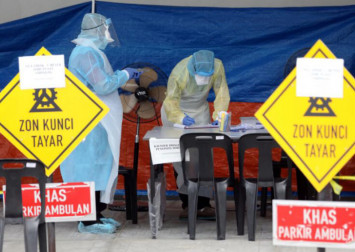 He also urged employers to adhere to the SOP and guidelines set by the relevant authorities.

"This is to ensure that action will not be taken against them and that their workers are free from Covid-19, " he added.

The Malaysian Employers Federation (MEF) said that the government's directive for compulsory Covid-19 testing for all foreign workers came at a time when businesses were struggling to restart their operations after almost two months of shutdown.

MEF executive director Datuk Shamsuddin Bardan said employers could end up spending up to RM1 billion (S$326 million) if they obeyed the directive.

He described the directive as an "overkill" which he said could lead to logistical problems with there being some 2.3 million documented foreign workers.