It all started with a Facebook posting by Najib on Tuesday (March 5), in which he said Khazanah never suffered losses during his premiership and when he was chairperson of the sovereign wealth fund.

"In the 10 years I was PM and chairperson of the company, Khazanah never suffered losses," he said. 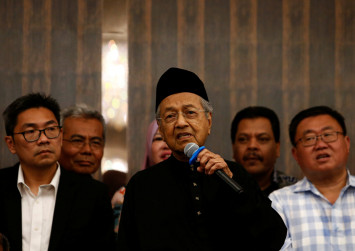 "RM25 billion isn't a small amount. It can pay nearly all of 1MDB debts or half of the cost of ECRL, which is RM55 billion," said Najib, referring to the scandal-hit state-owned investment fund he founded that had debt commitments totalling RM74.6 billion, inclusive of interest and borrowing costs, according to a 2016 government report on 1MDB.

"It's okay, the RM91 billion that's left in Khazanah is still a big amount. There are still many national assets that can be sold. Sell again when it's cheap," Najib said.

The ECRL, or East Coast Rail Link, is a China-backed project inked during Najib's tenure as prime minister and would see a 688km line spanning the width of the peninsula by 2024 upon completion. But the infrastructure project, which PM Tun Dr Mahathir Mohamad said would "improverish us", has been suspended and is now under review by the government.

Najib's remarks appeared to have irked Datuk Seri Azmin, who landed a series of sarcastic remarks on Twitter on Tuesday.

"Trouble these days is some politicos, often failed ministers, babble first and check later. End up "meludah ke langit, terkena muka sendiri" (spitting in the sky and hitting yourself on the face)."

According to Mr Azmin, the losses incurred by Khazanah was caused by a review of its assets and investments made before the Pakatan government took over last May.

He pointed to Khazanah-owned Malaysia Airlines suffering the heaviest loss of RM3 billion, attributing it to the failure to implement its turnaround plan.

"Investments made over the last few years into the airline before Pakatan took over have to be impaired. Tell me about impaired reasoning!"

Mr Azmin, in reiterating that Khazanah's losses were caused by "impairments" on investments made prior to May 9, 2018, said the blame game over the issue must stop.

"Forget the blame game. Every cloud has a silver lining.

"Look at 2018 as a clean-up of the problem assets behind the portfolio. Having taken these measures, I dare say that Khazanah will return to profitability in 2019."

Najib subsequently slammed Mr Azmin for downplaying the issue in a Facebook posting on Wednesday (March 6).

"I can try to forget about it. But, I'm not sure if Malaysians can easily forget about the dip of RM25 billion in Khazanah's value, the loss of RM6.3 billion, which is the first to be reported since 2004, or after the assets sold after Pakatan took over."

The former finance minister subsequently questioned Mr Azmin on his decision on forcing the sovereign wealth fund to pay a dividend of RM1.5 billion to the government after it announced its staggering losses.

Khazanah last announced a dividend payout of more than RM1 billion in 2017 when its investment value stood at RM115.6 billion.