Malaysia’s elder statesman Mahathir Mohamad, 97, on Tuesday (Sept 13) said he “did not expect” the passing of Britain’s Queen Elizabeth, who was a year younger than him.

The duo have often been spoken of in the same breath given the longevity of their public lives.

“I really did not expect her to pass away when she did. She was only one year younger than me,” Mahathir wrote on his widely followed blog chedet.cc. “She was a good example of a constitutional monarch. Her passing away is a loss not just to the British but to people who believe in the rule of law.”

In the post, Mahathir – long known for having stridently anti-West views – recalled how the queen had been humoured by his wry remarks about the English language during meetings of the Commonwealth heads of government.

“In Zimbabwe, I made a speech in which I pointed out that what is said in English is not what is meant,” Mahathir wrote.

“The presiding officer in Parliament is called Mr Speaker, but he may not speak. The Malay sultans are called the rulers but they may not rule. The British adviser ruled. Then there is the British Commonwealth, where the wealth is not common,” Mahathir said, recounting his remarks in the 1990s that were replayed when the queen celebrated her golden jubilee in 2002. 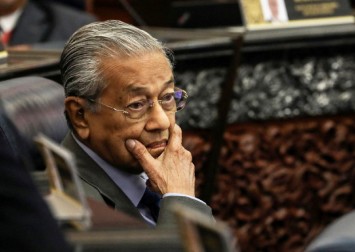 “The queen laughed” when the remarks were replayed, Mahathir said.

She travelled there in 1998 for the closing ceremony of the Commonwealth Games in Kuala Lumpur, the first time the sporting event was held in Asia.

Her visit came amid a period of political turmoil triggered by then prime minister Mahathir firing his former heir-apparent, Anwar Ibrahim.

Anwar, who is the present-day opposition leader and has remained an on-off rival to Mahathir, was arrested days before the queen closed the Games, and a security ring was thrown around her to prevent protesters from disrupting her itinerary.

Mahathir’s remarks on Tuesday came a day after Anwar’s visit to the British High Commission in Kuala Lumpur to offer his condolences over the queen’s passing.

“Her life and legacy will be fondly remembered by many around the world,” Anwar wrote on Twitter.