As Malaysia's parliament resumes, will it be Najib Razak's last meeting?

Malaysia’s parliament resumes on Monday (July 18) for its much-anticipated second meeting of the year, as political parties ramp up preparations for general elections that could be called any time now.

At the top of the agenda is a proposed anti-party hopping bill, which was mooted and expedited over the past year following the mass defection of MPs that led to the collapse of the Pakatan Harapan coalition in 2020, and the ensuing political crisis that persists today.

That crisis is threatening to come to a head over the next few weeks, as Prime Minister Ismail Sabri Yaakob grapples with mounting pressure from his Umno party, particularly from party president Ahmad Zahid Hamidi and former premier Najib Razak to call for early polls this year.

To analysts, the maths is simple – early elections will put on hold the multiple court cases that Ahmad Zahid and Najib, along with a bevy of senior party leaders, face over alleged corruption while they were in power, which they eventually lost in the watershed 2018 national polls.

Of the group, Najib, who is the first prime minister in Malaysia to lose an election, has already been found guilty of corruption involving a former subsidiary of the corruption-tainted fund 1Malaysia Development Berhad (1MDB).

He has denied all wrongdoing and will mount his final appeal against his 12-year jail sentence next month.

The push for early polls, which are not due until the third quarter of next year, could potentially derail the government’s plans to pass the anti-party hopping law at this coming parliamentary meeting as MPs in the “court cluster” – an Umno faction led by Ahmad Zahid and Najib – are likely to take the opportunity to pile on the pressure on the prime minister.

“The basic calculation is that the parliamentary sitting will be to see the mood, and how they’re going to pull down Ismail Sabri and push very hard for elections,” said James Chin, the director of the Asia Institute at the University of Tasmania.

“A lot of MPs on the Umno side during the parliamentary session will use the opportunity to, as the Malays say, ‘cucuk’ Ismail Sabri to call for an early general election,” Chin said, referring to the Malay term for prod.

Ismail Sabri was an unlikely candidate for prime minister. By many accounts, he rose to the coveted post in August last year as a middle-ground choice to appease competing interests between Umno and its offshoot party Bersatu, which is led by his predecessor Muhyiddin Yassin.

Muhyiddin bowed out after persistent demands from Umno for snap polls, just over a year after he took office following a coup that he and several others orchestrated which caused the Pakatan Harapan’s downfall in early 2020.

Ismail Sabri, a vice-president of Umno, is the first prime minister who is not the head of his party. This leaves him vulnerable to pressure from his party’s powerful supreme council and the president, who holds the sole prerogative of naming electoral candidates.

With two clear factions jostling for power in Umno, analysts expect something is going to give. The question is whether it will be sooner or later.

In Najib’s case, he has carefully crafted an image of being a victim of political persecution since he was first charged in 2018 while under Pakatan rule, while also working towards ensuring his charges are dropped with the return of Umno to power, according to long-time political analyst Bridget Welsh.

“The push for elections is predicated on an Umno victory and deals within Umno to assure his legal cases are dropped,” said Welsh, a research associate with the University of Nottingham Asia’s Research Institute Malaysia. “The political persecution narrative is also being used to shore up sentiment within Umno for national polls.”

On the other side of the Umno divide, Ismail Sabri will need to weigh his options carefully or end up getting cut out by his party, even if they had earlier named him as their prime ministerial candidate for the next elections.

Among the first things he did when taking office was to seal a confidence and supply agreement with the now-opposition Pakatan Harapan, which helped him secure enough support to pass his administration’s first national budget last year.

Read Also
In Johor election, is Malaysia's Umno seeking stability or a get-out-of-jail card for Najib? 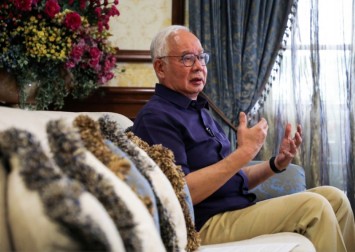 That deal is set to expire by the end of this month, but could become a potential shield for the prime minister if the stand-off in Umno turns ugly.

An extended pact with the opposition could help stave off a confidence vote, should Umno MPs decide to abandon Ismail Sabri, and stabilise the government.

However, this will come at a cost for the Pakatan Harapan bloc, which has already faced brickbats from supporters for “legitimising” the current administration by signing the agreement last year, Welsh said.

“Any formal agreement … would be seen as extending the tenure of current Harapan elites, apparently resistant to polls,” she said, adding that a renewed deal would need to come with “concrete deliverables, especially those involving issues affecting the well-being of voters”.

A more significant development would be how the Registrar of Societies (RoS) will rule on a decision made by Umno delegates at an extraordinary general meeting in May to postpone the party elections, which were due this year, to after the general election is held.

Should the RoS rule that the decision made at the May party meeting cannot be legally enforced, Umno will have to arrange for a party election before the end of the year, said Hafidzi Razali, a senior analyst with political risk consultancy BowerGroupAsia.

“Given the widening factions in Umno’s (upper) echelon, Ismail Sabri will have to contest for the party presidency or risk being replaced as Umno’s PM candidate,” Hafidzi said.

What happens at this parliamentary meeting, particularly how the anti-party hopping bill fares, could portend Ismail Sabri’s future.

“A united Umno vote for the bill could be construed as Ismail Sabri having Umno’s support of his leadership,” Hafidzi said. “On the contrary, any Umno abstentions or votes against would only widen the political cracks within Umno.”