High school students and their parents wait in line to receive coronavirus vaccines at a school in Kuala Lumpur. Malaysia has fully vaccinated 63.8 per cent of the population, and 88.4 per cent of adults.

After 150 days in operation, one of Malaysia's biggest Covid-19 vaccination centres shut its doors on Sunday (Oct 3), with over 1.2 million doses having been administered there.

Vaccine tsar and health minister Khairy Jamaluddin wrote on Twitter that the centre was the "biggest workhorse" in the country's national vaccination programme.

The PPV's closure is the latest indication of how far Malaysia's vaccination programme has come, after teething problems earlier in the year that were compounded by supply constraints.

PPV WTC, the biggest workhorse of PICK, is officially closed. Thank you to everyone that served & volunteered at this PPV. Some of my days were spent volunteering here. There were tough days but many more fulfilling days. #LindungDiriLindungSemua https://t.co/TLK0VpQBKg pic.twitter.com/kBLZCNxtAd

With over 2.2 million infections and nearly 27,000 deaths, Malaysia is among the worst-hit countries in Asia, on a per capita basis. But health experts say its vaccination programme is instructive of how countries can turn the situation around if they straighten out inoculations.

Eight months after the mass roll-out of vaccinations started, 64 per cent of the country's total population of 32 million people have been fully vaccinated, while 73.8 per cent are partly vaccinated. Of adults, 88.8 per cent have had both doses.

The daily caseload, which for weeks had stubbornly remained near record highs of over 20,000, has fallen to less than half of that in recent days, for the first time since July, with 8,817 cases recorded as of Tuesday midnight.

With the light at the end of the tunnel looking brighter, Prime Minister Ismail Sabri Yaakob's government is now eyeing a transition towards treating the virus as endemic, with a border reopening seen as a possibility by December.

All 13 states are now in either the second or third phase in the four-phased National Recovery Plan, with interstate travel - banned since May - expected to be reinstated once the adult vaccination rate reaches 90 per cent.

After being widely criticised over its response to the health crisis, just how did the government manage to get the vaccination roll-out right?

Since August, Khairy has also worn the hat of health minister, taking over from his much-lampooned predecessor Adham Baba, who earlier in the pandemic had advised Malaysians to drink warm water to fight off the coronavirus. He is currently the minister of science, technology and innovation.

"Khairy is a prime example showing how much difference and impact a competent and effective leader can make," Lim said, adding that "competent civil servants" in the health ministry also played a key role.

It has not always been smooth sailing for Khairy, an Oxford-educated rising star in the country's influential United Malays National Organisation. In April, he made headlines globally after blasting wealthy nations for hoarding vaccine supplies while giving lip service to global co-operation.

"Poor countries, less developed countries, are left to drown … while rich countries have bought enough to inoculate their citizens three, four, five times over. If this is not injustice, I do not know what is," he said in April.

His comments were welcomed by officials in developing nations who were similarly frustrated by vaccine inequality. At home, however, some critics charged that he was making excuses for the failure of former prime minister Muhyiddin Yassin's administration in securing vaccines shipments early on in the pandemic.

Khairy countered that Malaysia had limited resources to secure advance contracts, in contrast to countries like Singapore and the United States which had deep pockets.

As vaccine supplies stabilised from June onwards, Khairy's vaccine task force began rolling out what it termed Operation Surge Capacity in the Klang Valley, Malaysia's most populous region which is home to Kuala Lumpur, the administrative capital Putrajaya and urban areas of the wealthy state of Selangor.

Amar Singh HSS, a senior consultant paediatrician, said that was a turning point in the vaccination drive. "We had an initial slow start to vaccination in March 2021, due to supply issues, but this rapidly changed. By July 2021 we had accelerated to vaccinating 1 million new individuals every three to four days," he told This Week in Asia.

But while acknowledging the successes of the vaccination programme, experts pointed out that this is not a time for authorities to become complacent.

Also being closely watched is the situation surrounding undocumented migrant workers, with mixed signals on vaccinating them.

While Khairy has repeatedly said those who come forward to be vaccinated will not be reported to immigration authorities, other officials such as the home minister Hamzah Zainudin have a different stance. He previously said authorities planned to "round up" these migrants to "help" them.

If [undocumented migrants] don't come out to get the vaccine, we [will] go after them," he was quoted as saying in May.

In September, the minister - who has taken a strong-armed approach toward illegal immigration - said health care workers were obliged to tell security agencies when undocumented migrant workers turned up at vaccination centres.

"The government, among other parties, agreed that information related to undocumented migrants should be documented and recorded according to the general circular from the director general of Health," Hamzah said in a written reply to a parliamentary question. 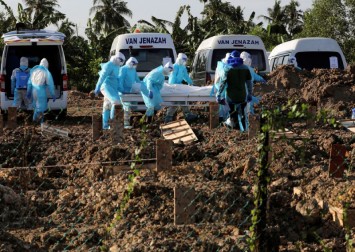 Nonetheless, the health ministry is working with the Malaysian Red Crescent to vaccinate undocumented migrants under a programme it runs, rather than the national vaccination programme.

A spokesperson for the group said the programme, which began on Sept 4, saw some 6,000 undocumented migrants vaccinated by the end of September.

Khoo Yoong Khean, managing editor of the Malaysian Medical Gazette portal, said authorities should pay heed to the various structural defects in the health care system that had been glaringly exposed during the pandemic.

"Our health care system is still strained, we still lack equipment and manpower in many hospitals and our health care workers are severely overworked," said Yoong, a Malaysian doctor currently employed in a Singapore hospital.

He added that Khairy, with his technocratic know-how, needed to use his current position as health minister to deal with the long-term issues in the Malaysian health care system.