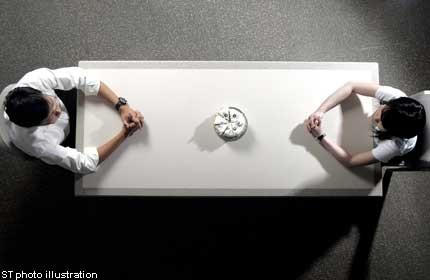 MALACCA - It was love at first sight for a security guard when he first saw a factory production officer in February last year.

Determined to marry her, the 30-year-old scrimped and saved whatever he could from his meagre sa­lary, resorting to eating roti canai on most days.

The girl's parents were also adamant that he come up with a marriage proposal first.

Other than that, he also spent a substantial amount for a lavish wedding reception on March 1.

The man thought that wedded bliss awaited him and his 28-year-old bride, but it was nothing like that at all.

Soon after the wedding, he was asked by his in-laws to live with them, instead of bringing his wife to live with him.

"I was happy thinking that I could save my money without renting a home outside and decided to give some cash to my in-laws as monthly rental without realising they had other motives," he said.

He was unable to consummate the relationship as his in-laws alle­gedly barred him from touching or being together alone with his wife.

"For two months, we slept separately and were not even allowed to hold hands, even while having dinner together," he claimed.

He further alleged that he was only allowed to see his wife chan­ging clothes from a distance, and was taken away from the house by his in-laws each time he attempted to get intimate with her.

He lamented that he felt lost and felt like he made a big mistake by marrying the girl.

"My in-laws could not provide me a reasonable answer why I was not allowed to be close to my wife."

He attempted to salvage the situation by trying to bring his wife to live in a rented house sometime before Hari Raya, but she refused and left for Kuala Lumpur without infor­ming him.

"I decided to move out to my house in Batu Berendam and told her that I would wait for her until she decided to be with me," he said.

With no response from his wife, he decided recently to apply for a divorce at the Syariah Court here.

"I felt that I have been deceived as I used all my savings just to marry the woman I loved," he said.

He has also appointed a lawyer to demand a refund for the wedding expenditure from his in-laws.

According to him, his friends were poking fun at him by suggesting he was impotent, while his family were also subjected to ridicule after his marriage was dissolved in less than four months.