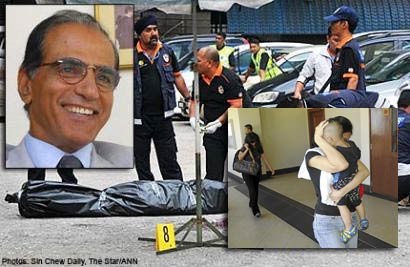 KUALA LUMPUR - A taxi driver who allegedly ferried the suspected killer who shot dead Arab-Malaysian Development Bank founder Hussain Ahmad Najadi was charged in the Sessions Court here with illegal possession of a pistol, a magazine and four bullets.

Chew Siang Chee, 45, who was handcuffed and seen holding his identity card, claimed trial when both charges were read out by the court interpreter.

As he stood in the dock, Chew kept glancing at his wife who was cuddling their baby, while their son sat beside her.

The father of four hugged his sister before he was taken to Sungai Buloh Prison pending the mention of his case on Aug 23.

He was accused of having a Walther pistol and a magazine at Desa Cindaimas condominium on Jalan Kuchai Lama at 5.45pm on Aug 3.

If convicted, he could be jailed up to 14 years and whipped not less than six times under Section 8 of the Firearms Act (Increased Penalties) 1971.

He faces a second charge of having four bullets that day.

DPP Wan Shaharuddin Wan Ladin asked for another date for the supply of documents to the defence because the first charge was not bailable.

Sessions judge Azwarnida Affandi then set Aug 23 for the prosecution to hand over the documents to Chew's counsel, Vincent Tey.

Najadi, 75, was shot by a man later identified as Kong Swee Kwan along Jalan Ceylon on July 29, while his 49-year-old wife was seriously injured in the incident.