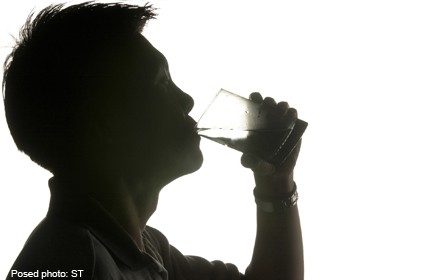 A posed photo of a man drinking a glass of water.

GEORGE TOWN - An accused drug trafficker, who swallowed some chemicals after his arrest, had no intention of committing suicide, his lawyer said.

Speaking to reporters outside the court after the man was charged. Puveneswaran said the police had clarified earlier that Tan was thirsty and they allowed him to drink but he vomited blood and was sent to hospital.

Tan is jointly charged with Khoo Teik Chye, 45, Chow Chee Keong, 37, and another person still at large with two counts of trafficking in 7,334gm of methamphetamine and 6,069gm of ketamine at a shoplot in Jalan Thean Teik, Air Itam here at 3am on Sept 22.

No plea was entered and bail was not provided as drug trafficking under Section 39B of the Dangerous Drugs Act carries a mandatory death sentence upon conviction.

The court fixed Nov 11 for mention of the case.