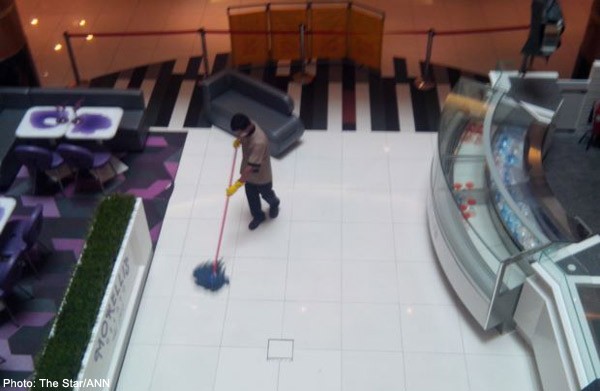 PETALING JAYA - A 26-year-old man was instantly killed after plunging from a height of four storeys at the Bangsar Shopping Centre near here.

A 50-year-old product advisor, who wishes to be known only as Ogy, said she saw glimpses of the man's body as he fell down at about 1pm.

"I heard people screaming as his body hit the ground. The sight of his body was just overwhelming.

"I never expected something like this to happen here," she said Wednesday.

It is believed that the man had lunch with his mother at the food court located on the fourth floor.

It is alleged that the pair were having an argument with each other prior to the incident.

"Initial investigations revealed that there was no elements of foul play in his death," he added.

ACP Muhammad Azlee said said the man was suffering from depression, but declined to associate his death with the affliction.

In another development, Jaclyn Low, the communications manager for the shopping centre, said they are working with the police to ascertain the sequence of events leading to the man's death.