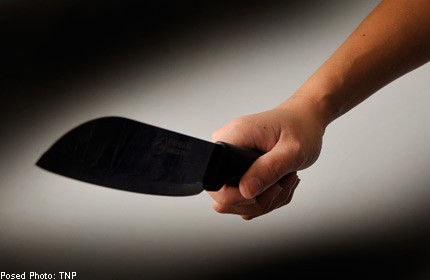 KOTA KINABALU - A man claiming to be possessed by spirits killed his seven-year-old son by slitting his throat before drinking the boy's blood as family members watched in horror in the east coast Lahad Datu district.

Lahad Datu police chief Supt Shamsuddin Mat said the boy, Haikal Salimar, was sleeping in the living room of the family house at Kampung Epil at about 9.45pm on Thursday when his father suddenly grabbed a knife from the kitchen and slit his throat.

"According to the family members, the incident happened very quickly and the boy was killed before any of them had time to react," he said when contacted on Saturday.

Among those in the house at the time of the incident were the Haikal's grandparents and an uncle, he said.

Shamsuddin said prior to the incident, Haikal's 35-year-old father shouted that spirits were disturbing him and wanted him to drink human blood.

The man then ran into the kitchen and grabbed a knife before slaughtering his son as grandparents could only watch helplessly.

The family members shouted for help and with the aide of villagers wrested the knife from the man tied him up.

Police rushed to the house located some 2kms from the town area after being alerted about the incident.

Shamsuddin said the man had been remanded for seven days under Section 117 of the Criminal Procedure Code to assist in investigations being carried out under Section 302 of the Penal Code for murder.

"A knife believed to be used in the killing had been recovered from the scene while the boy's body has been sent to the Lahad Datu hospital for post mortem," he said.

Shamsuddin said investigations showed the man may have indulged in black magic and superstitious beliefs.

He said when arrested the man did not appear to be under the influence of any substance though he had been sent for a medical examination.

He said the man would also be sent to undergo a psychiatric evaluation.