Man turns nursery into his own 'Jurassic Park' in Johor 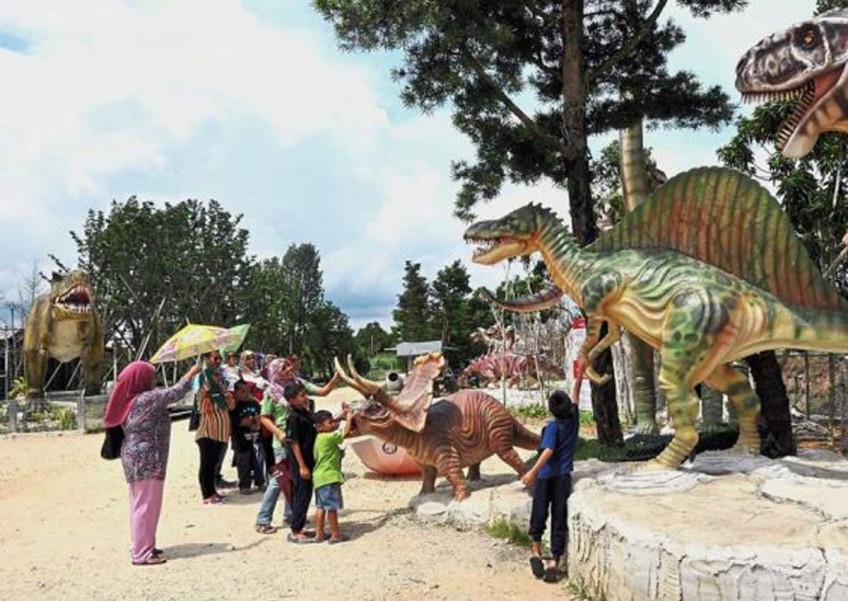 In awe: Visitors checking out Heng’s collection of dinosaur replicas ﻿at his nursery near the Muar second-link bridge in Johor.
The Star/ Asia News Network

MUAR: A nursery owner has turned his interest in dinosaurs into a new tourism attraction in Johor.

Don Hu Jurassic Park owner Heng Chiang Hwee, 36, said he has expanded his collection of eight dinosaur replicas to 42 in his nursery in the past four years.

Among his collection are a 12.8m tall Tyrannosaurus Rex, Triceratops, Pachycephalosaurus and Stegosau­rus.

"At first, I just did it for fun as my whole family, including my two children, loves these creatures and we placed them in my nursery.

"But after a while, people kept turning up to take photos," he said at his nursery near the Muar second-link bridge yesterday.

Heng welcomes visitors to his nu­r­sery and allows them to take photos at no charge with the moving dinosaurs, which are specially customised from China and in Malaysia.

He planned to have a total of 100 dinosaurs in three years' time and will introduce more dinosaur merchandise.

Heng, who has 16 years of experience in landscaping, said he would use up the 5.6ha of land in his nur­sery for various attractions especially relating to dinosaurs.

"My children are excited to see the large dinosaurs that are fitted with sound-making devices and move like real ones," she said.

Technician Zairin Kasim, 32, from Malacca, said he was surprised with the wide collection and landscape featured at the park.

"My two daughters are in awe of the creatures featured in this park as they have never been exposed to such creatures before.

"It is a new and interesting experience for them, and even myself," Zairin said, adding that the park would attract more tourists to the district.