Man who hit girlfriend with hammer in video charged in court 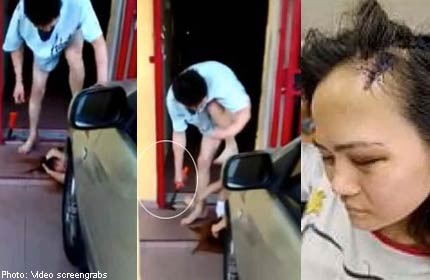 SEREMBAN - Siow Kong Poh, 33, allegedly the man in a video seen hitting his former girlfriend with a hammer and stomping on her, pleaded not guilty when he was charged in the magistrate's court here with causing grievous hurt with a weapon.

He allegedly committed the offence on Lim Pui Lee at his home in Taman Jasper Jaya on Saturday, which reportedly resulted in her requiring 30 stitches on her head.

According to media reports, the duo, who were both divorced, had been in a relationship for close to 10 years prior to the incident.

The video that went viral is believed to have been shot by Lim's daughter.

In it a man was seen repeatedly hitting the woman, stomping on her and even hitting her with a hammer.

Another woman was seen trying to stop the beating, while a voice was heard pleading for the beatings to be stopped.

The video, which appeared on the Facebook page of the Malaysian Crime Awareness Campaign, has been shared 160 times since it was uploaded on Monday.

The video itself on YouTube has been viewed over 6,800 times.

Seremban OCPD ACP Saiful Azly Kamaruddin said the assault was related to a domestic dispute and the suspect was arrested the same day.

The victim received outpatient treatment at the Tuanku Jaafar Hospital in Seremban.

[[nid:34710]]
SUBSCRIBE TO OUR NEWSLETTER
Your daily good stuff - AsiaOne stories delivered straight to your inbox