Many surprised by Najib's picks in new Cabinet reshuffle 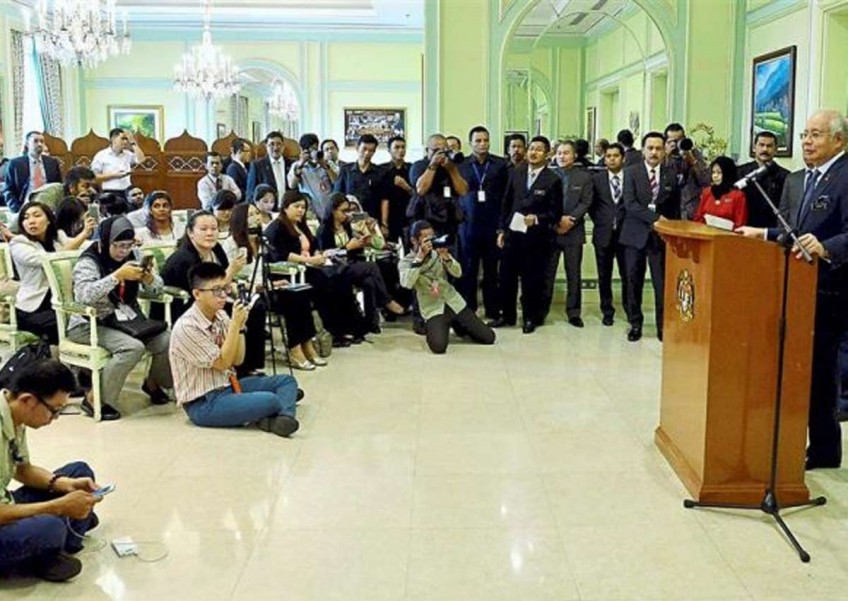 Najib speaking to the press after announcing the new Cabinet in Putrajaya.
The Star/Asia News Network

PUTRAJAYA: In a change that surprised many, Datuk Seri Najib Tun Razak's Cabinet reshuffle saw the return of a former minister and the resignation of another.

The Prime Minister has reappointed Tan Sri Noh Omar into his Cabinet to assume the post of Urban Wellbeing, Housing and Local Government Minister.

The 58-year-old Tanjung Karang MP has previously served in two ministerial portfolios - the Entrepreneur and Co-operative Development and Agriculture and Agro-based Industry - before being dropped after the 13th general election.

Many see Noh's appointment as a "reward" for Barisan Nasional's impressive win in the Sungai Besar by-election, increasing its majority from 399 in the last general election to 9,191 on June 18.

Noh is the Selangor Umno and Barisan Nasional chairman.

Also catching many by surprise was Najib's announcement on the resignation of Second Finance Minister Datuk Seri Ahmad Husni Hanadzlah.

"I accept his decision to retire due to personal reasons. I would like to express my gratitude for his excellent service over the years," he said before a packed press conference.

"He has informed me several times.

"So, I respect his decision. He is quite ready to retire," said Najib to a question on why Ahmad Husni, who has held the post since 2009, might want to retire.

Ahmad Husni, 64, who is the Tambun MP since 1995, had held several posts, including as deputy minister for Finance and the International Trade and Industry.

The former Second Finance Minister has also resigned as Tambun Umno division head, from all posts in Umno and as Barisan Nasional treasurer, according to his political secretary Datuk Shamsul Zairil Kamaruddin.

In what he described to be the restructuring of the Cabinet to further strengthen his administration, Najib also announced Datuk Johari Abdul Ghani's promotion from Deputy Finance Minister to the Second Finance Minister.

Silam MP Datuk Datu Nasrun Datu Mansur has been appointed as Mah's deputy, a position made vacant following the death of Tan Sri Noriah Kasnon in a helicopter crash in Sarawak last month.

With the reshuffle, Chua will now be Deputy International Trade and Industry Minister while Lee will be Deputy Finance Minister.

Asked if this was the Cabinet line-up that would take Barisan into the next polls, Najib was non-committal, replying that "it depends when the election will be".

Devamany was sworn in as a senator yesterday and will be giving up his position as Perak state assembly Speaker.

Najib said there would also be re-assignment of duties for the Ministers in the Prime Minister's Department to be announced later.

"The Government will strive to ensure the fulfilment of promises for economic development and the welfare and safety of the people," he said.

The new ministers and deputy ministers will be sworn in before the Yang di-Pertuan Agong at Istana Negara 11.30am today.