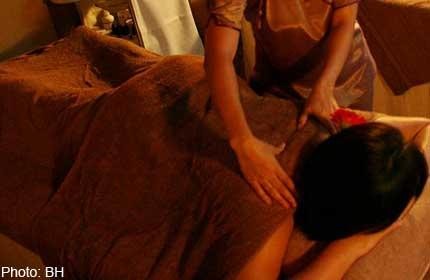 MALACCA - A 71-year-old stroke patient was so obsessed with a young masseur that he did not mind paying thousands of ringgit for her touch.

The traditional massage sessions ran up a bill of RM14,000(S$5400) since April, with the man paying the Sarawakian woman between RM1,500 and RM2,000 for each hour-long session.

The man thought nothing of withdrawing his entire unit trust fund savings to finance his "craving" for the masseur.

That was not all - the sick pensioner even borrowed RM10,000 from a loan shark to pay the Sarawakian woman on the eve of Hari Raya.

His daughter, a 33-year-old teacher from Bukit Beruang who wanted to be known only as Ani, said the family's festive spirit was ruined by the masseur constantly harassing her father for more money.

"We tried to ask why she charged so much for massaging my dad but she did not provide any reason," said Ani, who lodged a second police report against the masseur on Aug 7 after finding out that her father had gone to see a loan shark over the woman's demands.

Ani said the family first lodged a report against the masseur, who works at a massage and foot reflexology centre in Taman Melaka Raya, after they found out that their father paid exorbitant amounts to the masseur, adding that her 41-year-old brother followed up with another report later.

She said her father had been mentally unstable since suffering a stroke in 2010 and was categorised as a disabled person by the Welfare Department.

"When I went to the massage centre, a man who was there asked me to leave as the management had nothing to say," Ani said.

"We are now worried that the loans sharks will resort to threats to recover the loan," she added.

It is learnt that the pensioner has lodged a police report against the masseur and one of her male friends.