"We discovered that there were foreigners getting drug supplies and trafficking among themselves during the MCO.

"They are limiting the drug distribution to only their countrymen to avoid detection during the MCO period," he said when contacted Tuesday (April 21).

However, Comm Ramli said the police are on to them.

"We are also aware of other drug pushers trafficking in smaller amounts.

"They are using various ways, including using delivery services to send their 'packages'," he said.

However, he added that not all delivery riders are complicit and some have even provided tipoffs.

"There are also those who reported suspicious packages that turned out to be drug deliveries.

"We commend those who co-operated with us to stop this activity. However, those who are in cahoots with the traffickers would demand higher 'tips' from their clients," Comm Ramli said.

The NCID had met with representatives of various delivery companies even before the MCO came into force on March 18, to get their co-operation in preventing suck occurrences, he added.

"We have made multiple arrests at such parties in various states. The party-goers would resort to having their own private parties as they could not go to entertainment outlets," he said.

The most recent raid on such a party was on Sunday (April 19) when 12 people were arrested in Penang, he added.

The NCID, according to Comm Ramli, is actively conducting enforcement operations nationwide and collecting actionable intelligence as the demand for drugs is getting higher despite the ongoing MCO.

"We cannot afford to let our guard down.

"So far, we managed to make various followup arrests based on information gathered and we will continue to do. Drugs remain the nation's number one enemy," he said. 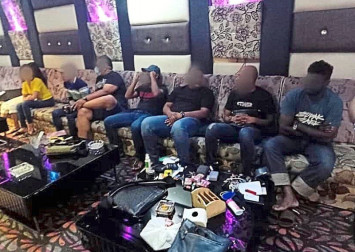 Comm Ramli had previously said 3,923 people were detained for drug-related offences nationwide between March 18 and April 16.

"From those detained, 208 of them were arrested for drug trafficking under Section 39B of the Dangerous Drug Act 1952.

"We also seized RM7.5 million (S$2.4 million) worth of drugs during the same period," he said.

Comm Ramli said during phase one of the MCO, the drug pushing trend was slow but it began to pick up in phase two.

"In phase two, we discovered that large scale traffickers are back in business due to demand from their customers," he said.

Comm Ramli urged those with information to contact the nearest police station.

"Winning the war on drugs requires the co-operation of the public. Together, we will battle the drug menace successfully," he said.