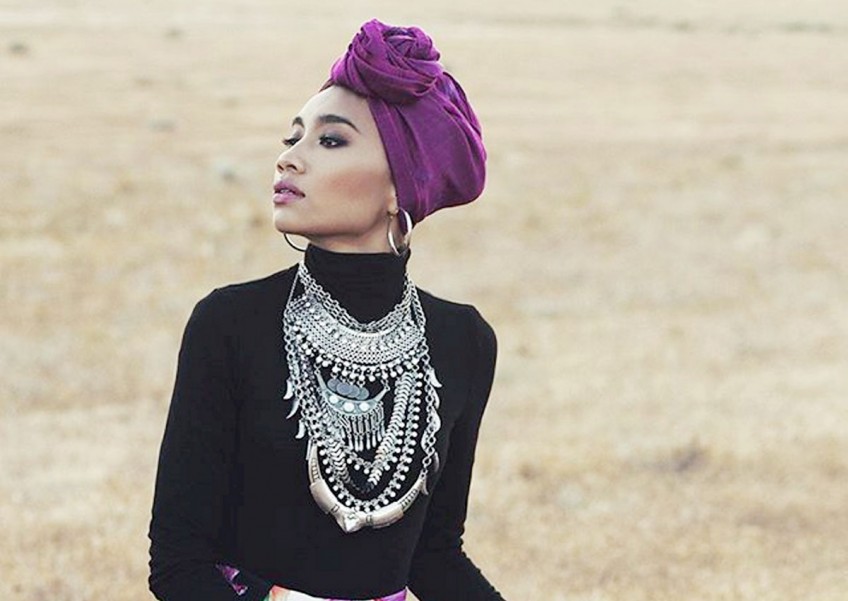 WHILE many of her former university mates are searching for jobs, Zakirah Zainan, 22, is busy building her fledgling modest fashion e-commerce business @Zakeyra.

"My parents were against it at first as they wanted me to focus on my studies, but now they are also pitching in to help me meet my orders," says the economics major, who goes by the name Kyra.

Her dream is to sell her own designs, but for now she is working with a supplier to get the latest trends and styles.

She cited the Indonesian sisters-in-law who started the hijabi fashion online store Hijabista, and Vivy Yusof of FashionValet as her idols.

Kyra believes the modest fashion and halal market in Malaysia and the world is growing, with a lot of opportunities for young Muslim women.

"I am inspired by FashionValet's rapid growth in the region. I have also started taking orders from Singapore," she says, pointing to technology, especially social media, as an enabler.

"I also feel that there is a lot of support from the society for young Muslim women to venture into business and start their own companies.

"Unfortunately, it is mostly for fashion, beauty and food. There is still not much support for women to start, say, engineering or science-­related companies."

She finds that the public is also less forgiving of "loud and strong" women.

"Just look at (cosmetics millionaire) Datuk Seri Vida. She is very successful, but people just want to tear her down because she refuses to conform to society's expectations."

Like many ambitious Malaysian Muslim women her age, Kyra hopes to get married and start her own family one day, but her ultimate goal in life is to be a good Muslim.

A study by marketing trend and research outfit J. Walter Thompson's Innovation Group, "The New Muslimah: South-East Asia Focus", shows that while the region's Muslim women aged 18 to 39 are more religiously observant than the generation before - as seen by increased adoption of modest fashion and the hijab, or Muslim headscarf - they are also more professionally ambitious and cosmopolitan in outlook.

The rise of the new generation of millennial Muslimah in Malaysia, Indonesia, Singapore and Brunei, combined with an explosion of social media, digital platforms and e-commerce, has led to the rapid development of a burgeoning market for halal fashion, beauty, technology and food, it notes.

Most, if not all, young women in the region own a mobile phone. They are on WhatsApp, Facebook and Instagram. Many shop online, mostly for clothing and beauty products, travel and groceries.

Hijabistas are not only becoming more visible in blogs, fashion and beauty campaigns, they are also launching businesses and setting trends by sharing their style on social media, reinventing the halal category with a slew of sleek, modern brands and stores, says the report.

With the number of digital consumers in South-East Asia climbing by 50 per cent over the past year to 200 million (according to business consultancy Bain & Company) and the Internet economy valued at RM155.5billion (S$50 billion), the number of young Muslimah shopping and selling online is a force to reckon with.

"It is setting a trend - we are stylish, we are confident and we are professionals," Sarah Shah Nor, the founder of Modvier, a modest fashion boutique in Kuala Lumpur that represents 72 Malaysian brands, is quoted as saying.

The religiosity of the millennial Muslim women - 95 per cent say Islam is very important to them - does not stop at clothing and halal products, though. According to the report, religious classes have become very popular.

While some have described these developments as a kind of Arabisation of South-East Asian culture, many of the young Muslim women say donning the hijab and modest attire is a choice.

"I think we are creating our own fashion," says office worker Anira Sabran, 22.

Anira observes that there is also a growing trend of the use of the niqab (face veil) in the country.

"It is not compulsory for women to cover their face in Islam, but some say it makes them feel closer to God. Of course, there are also many who are only doing it for fashion," she says.

Still, she admits that there are those who believe that people wearing tudung are 100 per cent religious and pressure others to cover up.

"We can't be judgmental," she says. "Some of their 'advice' posted online amount to cyber harassment and bullying."

Some even receive online threats of violence. Feminist activist Maryam Lee, 25, who is also the programme director at interfaith dialogue outfit Projek Dialog, had to seek refuge at a friend's house after she received death threats for taking off her hijab, which she had worn since she was nine.

Solek Cosmetics co-founder Dahlia Nadirah Juhari, 32, who counts herself as a "minority" for not covering her hair, thinks people tend to confuse Arabic culture with Islam.

"Young women today have a lot more knowledge on religious and consumer issues than their parents, so they are more discerning.

"Unfortunately, this has made some more judgmental of others," she notes, adding that she has been told her brand would sell 10 times more if she wore a hijab.

Even singer Yuna, who insisted on covering her hair while trying to break into the US music scene, has also been a trolling target of some conservative Muslims in Malaysia because she wears a turban, which they consider to be an incomplete headscarf.

Yuna has shrugged off the criticism, posting on Instagram: "They call me perempuan sampah (trashy woman) and tell me that I might as well go naked. All I can do is be patient."

As for another Malaysian singer, Takahara Suiko, the hijab has become a practicality for her, though not many people share her view on it.

"Instead of dyeing your hair blue one day or green another day, you can use a scarf of any colour and on any day.

"The tudung itself has become a fashion thing. It's an accessory. It's comfortable. I don't have to think about a bad hair day. It protects my hair from the sun," she says.

The headscarf, she adds, may say more about the wearer's fashion sense than her piety.

Dina Zaman, executive director of Iman Research, a Kuala Lumpur-based think-tank that studies society and religion, says: "While we are becoming more progressive, Muslim women in Malaysia still have a lot of questions on Islam."

"In my personal capacity, I am still asked for advice on Muslim women's rights - which lawyer should they go to, is it true that being beaten is okay, etc..."

"This is why Muslimah now turn to the Internet - to seek a brand of Islam that speaks to them. Look at the proliferation of Muslimah women's groups who turn to foreign teachers for guidance," she says, stressing that this is something the authorities need to monitor.

Studies by Iman Research show that some Malaysian women who are radicalised have not flown to Syria or Iraq, she says.

"One Muslimah we interviewed said that many people have the notion that Islamic femininity is based on purity of faith embodied in their very selves. They want to be seen as the ideal Muslimah," she adds.

Dina says that with education and social media, young Muslimah have taken it upon themselves to empower themselves.

"Now we need to be mindful that they are creating their own paradigm within an Islamic framework," she adds.