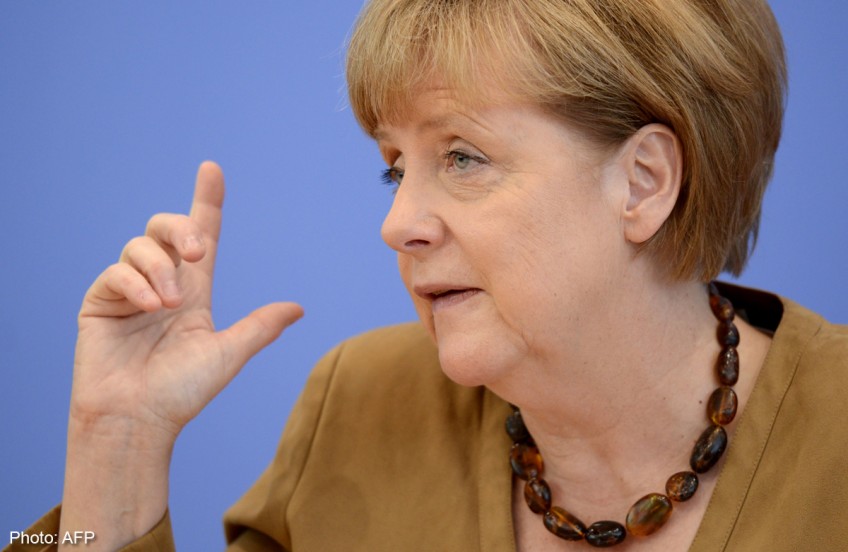 German chancellor Angela Merkel at a press conference on Friday.

BERLIN - Germany's Angela Merkel challenged Moscow's attempt to pin the downing of a Malaysian airliner on Ukraine, pointing to Russia as a source of separatists' weapons.

But she said it was too soon to talk about retaliatory measures.

The chancellor said there was evidence that the Malaysian Airlines Boeing 777, which crashed into a field in Ukraine killing all 298 people on board, had been shot down.

It needed a ceasefire between Ukrainian government forces and the pro-Russian rebels to permit a full, independent investigation into the tragedy, Merkel said, issuing a "very clear call" for Russian President Vladimir Putin to help make this happen. "These events have once again shown us that what is required is a political solution and above all that it is also Russia that is responsible for what is happening in Ukraine at the moment," Merkel told her pre-summer holiday news conference on Friday.

The incident could mark a pivotal moment in the worst crisis between Russia and the West since the Cold War. Putin put the blame on Kiev for renewing an offensive against rebels two weeks ago after a ceasefire collapsed. He urged an "unbiased" inquiry.

A US official said Washington strongly suspected the plane was downed by a sophisticated surface-to-air missile fired by Ukrainian separatists backed by Moscow. An Italian government source said "there are no doubts" it was shot down by rebels.

Merkel said it should be a top priority to stop the eastern Ukrainian separatists getting weapons from Russia. "It is indeed the case that the separatists are heavily- armed and there are many indications that some of these weapons have come across the border from Russia," she said.

The crash happened a day after European Union leaders stepped up sanctions on Moscow, agreeing to penalise Russian companies that help destabilise Ukraine and to block new loans to Russia through two multilateral lenders.

The EU will draw up by the end of July a first list of companies and people to be hit with asset freezes under the new criteria.

Merkel said that provided leeway for action against Russian firms and individuals, but when pressed on whether the airline incident would trigger wider sanctions, she was cautious. "Regarding sanctions, I'd like to point out that the events with the plane, as far as I remember, were not even 24 hours ago and at the moment we need to sort out an independent investigation," Merkel told reporters. "So it's perhaps premature to draw conclusions before we have access to the remains of the plane," she said.

Merkel and Putin are in regular telephone contact over the Ukraine crisis and spoke as recently as Thursday, Merkel said, though it was not clear whether that was before or after news of the passenger plane being downed.

The German leader has urged Putin to use his influence with the separatists to help bring about an end to the fighting in the east in which hundreds of people have been killed.

But her influence on the European Union is seen as one of the reasons why Brussels has been more reluctant than Washington to impose wider economic sanctions. Critics say this is partly because of Germany's strong trade links with Russia, which provides more than a third of its gas imports.

EU diplomats say it is too early to decide on tougher sanctions but the issue will be discussed by EU ministers on Tuesday who are tasked with preparing a first list of people and entities from Russia that would be targeted. That leaves scope to decide which companies, and how many, should be penalised.

Chris Weafer, a partner of the Moscow-based consultancy Macro-Advisory, said that until now it had looked unlikely that Europe or the United States would move on to broader trade and economic measures, known as "stage three" sanctions. "But the Malaysian airliner tragedy is a potential game changer," he said, adding that if the accusations were proven, it could define what he called "the most dangerous phase in the conflict in eastern Ukraine".

However, Otilia Dhand at the Teneo political risk consultancy in London expected limited fallout. "It is a horrible tragedy, but in two or three days' time, everyone will fall back to the positions they held before it happened, including the Russians," she said.