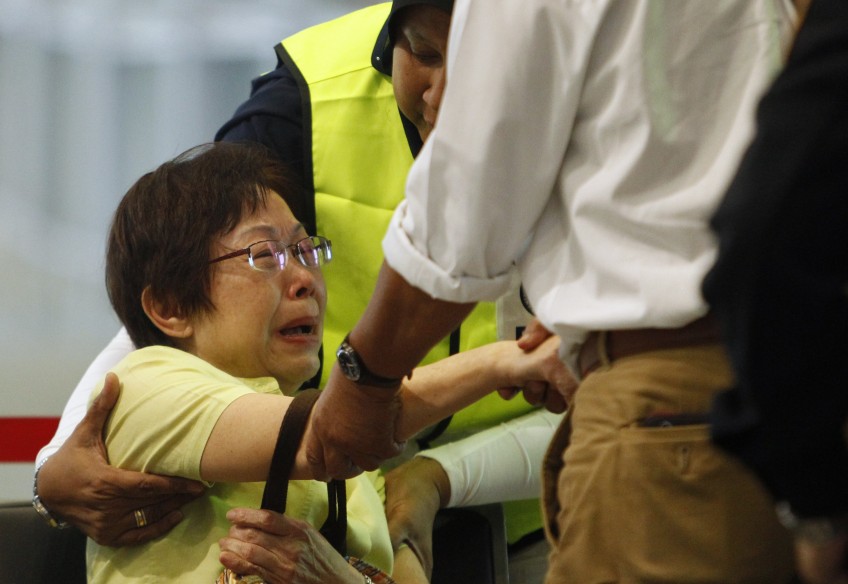 A woman, Siti Dina, weeps after seeing her daughter's name on the list of passengers who were onboard Malaysian Airlines Flight MH17.

PETALING JAYA: The passenger manifest of MH17 tells a grim tale. More than 20 families were wiped out when the Malaysia Airlines jetliner was shot down in Ukraine.

Two families of six were from Netherlands and Malaysia while there were a number of families of five, four and three that perished.

Many of those who died were children, of which at least 20 were below the age of 12.

A number of teenagers also perished along with couples who were returning from a holiday or embarking on one.

Fifteen-year-old Jinte Wals had been so excited about her upcoming holiday in Malaysia that she tweeted about it an hour before her flight left Amsterdam.

She died along with her cycling enthusiast father Jeroen, mother Nicole, and siblings Brett, 17, Amèl, 12, and nine-year-old Solenn.

"Over uurtje in t vliegtuig naar Maleisië ! (In an hour, I will be in the air to Malaysia!)," she posted on Thursday, on what would become her last Twitter message.

The Wals were from the small town of Neerkant in the Netherlands.

Neighbours living across from the family told Dutch newspaper Algemeen Dagblad that they could not believe that the family of six has been killed.

"It is awful. Never again shall we see Jeroen bring out the bicycle for his daughter," Nel and Ton Winkelmolen told the daily.

Families of five who were killed included Dutch Johannes van den Hende, his Malaysian wife Shaliza Dewa and their children Piers (15), Marnix (12) and Margaux (eight). They were returning to their home in Melbourne after a holiday.

Lawyer John Allen, his Dutch wife Sandra Martens and sons Christopher (16), Julian (14) and Ian (eight) were reportedly heading to Indonesia for a holiday.

The holiday ended tragically in the sunflower fields of Ukraine's Grabovo.

Charles Smallenburg from Hilversum, his wife Therese, daughter Carlijn and son Werther died heading to Malaysia for a summer break.

Robert Van Keulen, his wife Caroline, and sons Allard (16), and Jeroen (15) were heading to Borneo with a stopover in Kuala Lumpur.

Also heading to Borneo were Peter Essers, his wife Jolette Nuesink, and children Emma (20) and Valentijn (17). Nuesink's passport was the first to be retrieved from the site and the image of her picture went viral on the Internet.

Many young families were also wiped out in the tragedy, including Dutch Paul Goes who worked in Shah Alam, his Malaysian wife Shuba Jaya and daughter Kaela, who would have turned two soon.

Emile van Muijlwijk who worked as a logistics manager in Singapore died along with his Indonesian wife Vickiline Kardia and young daughter Adinda.

Johnny Paulissen, his wife Yuli Hastini and children Martin (five) and Sri (three) were also killed as well as Oscar Kotte, his wife Miranda and their six-year-old son Remco.

Also dead were the three Maslin children - Mo (12), Evie (10) and Otis (eight) who were returning to Perth from Amsterdam with their grandfather Nicoll Norris.

The Netherlands' Thuis In het Nieuws reported that seven people from two families in the southern Dutch town of Rosmalen died in the crash. The families were close friends.

Leon Wels and his wife Conny (Cornelia) were reportedly on board with their 10-year-old son Sem while Remco Trugg and his wife Yvonne were with their daughters Tess (10) and Liv (7).