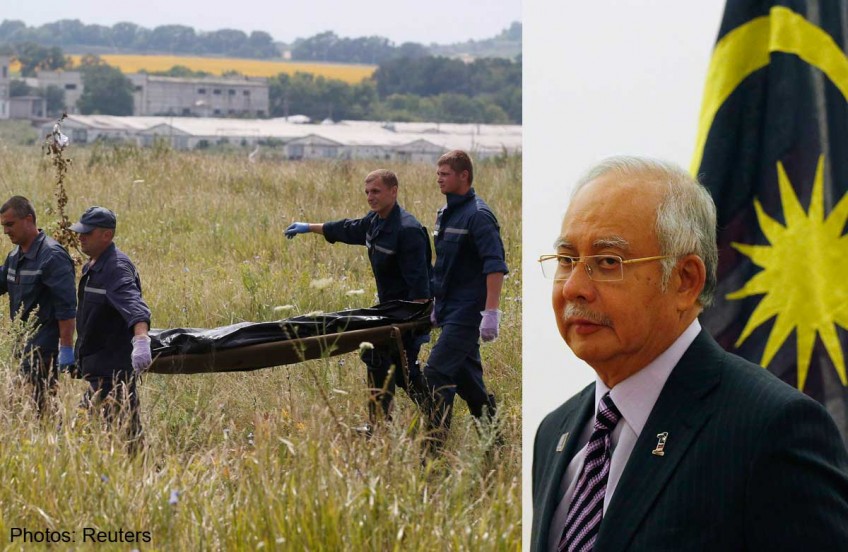 Rescue workers sifting through the debris at the crash site of MH17.

KUALA LUMPUR, July 22 (Reuters) - As Western leaders increasingly pointed the finger of blame at pro-Russian separatists, and Moscow itself, over the shooting down of a Malaysia Airlines plane in eastern Ukraine, the government in Kuala Lumpur said little.

The reasons for that reticence - which had drawn criticism at home - became clear on Tuesday, when Malaysian Prime Minister Najib Razak announced shortly after midnight that his government had negotiated the release of the remains of nearly 300 victims of Flight MH17 from separatist-held territory.

Najib, working through intermediaries to reach rebel leader Alexander Borodai, was a key figure in brokering the deal, according to two sources in Malaysia with direct knowledge of the negotiations.

The talks were kept under tight wraps, with Najib initiating the conversation and bringing only a handful of his closest confidants into the discussions. "It was the Prime Minister's project," one of the sources said. "He was the main player and he kept this within a very, very, very tight circle. Even some of his closest advisers were not part of this circle, and were surprised by this deal." The agreement was that Malaysia would receive the aircraft's"black box" voice and flight data recorders, which were in rebel hands after being recovered from the crash site near the Russian border.

The bodies would be moved from separatist-controlled territory so that international investigators could safely conduct DNA tests and later return the remains to families.

Intermediaries, whom the sources declined to identify, facilitated at least one telephone discussion between Najib and Borodai, via a translator, the sources said.

Malaysia wanted three things from the separatists: return the bodies, hand over the black boxes and assure safe access for investigators to the crash site.

Borodai's people wanted a signed document acknowledging that the black boxes were not tampered with, the second source said.

They also insisted on handing over the black boxes to the Malaysians because they did not want the devices in the hands of the Ukrainian government. The voice and data recorders will be crucial for investigators to piece together exactly what brought down the plane as it flew over eastern Ukraine on Thursday en route from Amsterdam to Kuala Lumpur.

As negotiations advanced, Transport Minister Liow Tiong Lai, who had been appointed to the job only a few weeks earlier, and other representatives of the airline and government flew to Kiev over the weekend.

A broad agreement took shape on Monday, and Najib broke his silence, telling a small group of officials that a deal had been struck, the first source said.

A press conference he had scheduled for 5:30 p.m. was abruptly cancelled. At 10 p.m., Najib assembled his advisers and press officials at his residence for a briefing.

The public announcement came just after midnight. By morning in Malaysia on Tuesday, the black boxes were in Malaysian possession and a train carrying the bodies was heading out of separatist-controlled territory.

PUBLIC ANGER Including the 15 crew, 43 Malaysians were killed on the plane, and in the days before the deal was made public some of Najib's advisers were urging him to make a strong statement, noting that leaders of the United States, Australia and Britain had all expressed outrage.

At home, anger was building over the poor treatment of the victims' remains. In the Muslim faith, followed by the majority of Malaysians, funerals are supposed to be held within 48 hours of death. "There was growing pressure on the PM to reflect some of this domestic anger," the first source said. "They felt that they needed the PM to make a strong statement to the country to address some of these building concerns, and some of them began to craft a statement on Sunday afternoon." But Najib waited. Malaysian officials say a carefully cultivated neutrality was key to sealing a deal that had eluded Western powers. "In recent days, there were times I wanted to give greater voice to the anger and grief that the Malaysian people feel, and that I feel," Najib said when he finally broke his silence on Tuesday. "But sometimes, we must work quietly in the service of a better outcome." Najib has cast himself as a leading moderate voice, founding the Global Movement of Moderates at a United Nations General Assembly in 2010.

Transport Minister Liow took two days before acknowledging - without assigning any blame - that the Boeing 777 appeared to have been hit by a missile over eastern Ukraine on Thursday.

Not once did he or any other Malaysian officials publicly point the finger at Russia. "That's the position of the Malaysian government. Our priority is not to get involved politically. We just want to get the bodies and get investigators to the site," said a government official who spoke on condition of anonymity.

While President Barack Obama blamed Russia for supporting and arming rebels who the West accuses of firing a surface-to-air missile that took down the plane, Malaysia kept channels open to both Ukraine and Russia, eventually getting direct access to separatist leader Borodai.

That meant when an agreement was reached it did not look like the rebels, or their backers in Moscow, were bowing to Western pressure, said one analyst. "

It helps, definitely, that Malaysia is seen as a non-party to the ongoing conflict on the ground," said Alan Chong, associate professor at the Rajaratnam School of International Studies in Singapore.

"Whereas NATO, the US, Britain, are definitely partial towards the Ukrainian government. They have posed particular difficulties to the rebels."