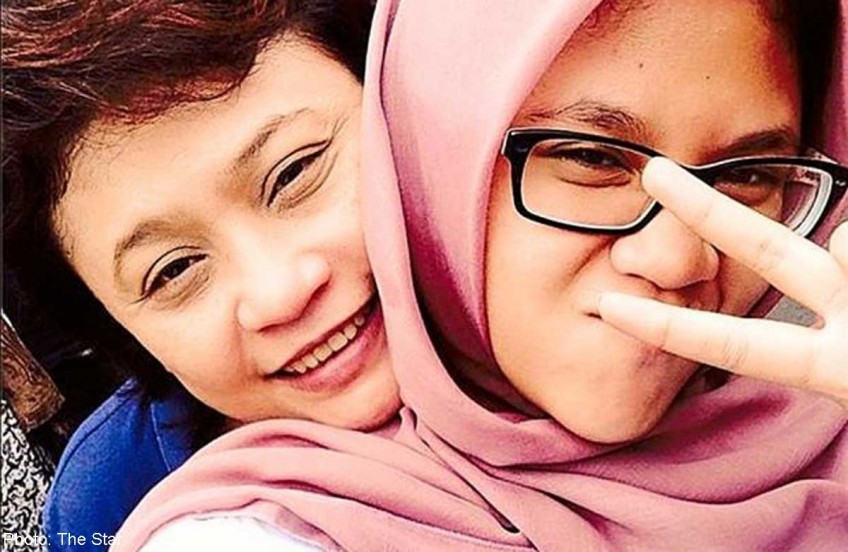 Her 47-year-old mother, a chief stewardess was among the cabin crew on the ill-fated Malaysia Airlines plane Flight MH17.

"I am back to being alone. Mummy, only Allah knows how much I miss you right now," were among the heartbreaking tweets that the 15-year-old sent out on Twitter and Instagram over the past few days.

Yesterday, she tweeted: "I'm getting mad and angry at everything and everyone. Mummy, come back. Please."

But in other tweets she also expressed her determination to be successful in life, and to make her mother proud.

"I will never stop remembering you, mum. Nobody can stop me from missing you. You were all I had.

"You always wanted me to be a success right? Well just watch, mummy, because I will and I am going to turn things around.

"Mummy rest okay? Just enjoy the view of me making things right from up there.

"I love you so much but Allah SWT loves you more," she wrote.

On Monday, she posted a photo of herself dressed in black, with the caption "All black today for #MH17".

The teenager, who is currently studying at a boarding school in Seremban, has many photos of herself with her mother on her Facebook and Instagram accounts.

They were obviously close, as on Facebook, both frequently posted about how much they missed each other before the horrific plane crash.

"Mummy visiting me is the best thing I could've asked for" and "Dora Shahila I miss you and grandma! Pray for me in my exam!".

As for Dora's Facebook account, her last few profile picture changes showed her dressed in black, as a mark of respect for those on board MH370.

Many of her friends commented on the photos, saying that they were glad she had not been on MH370.