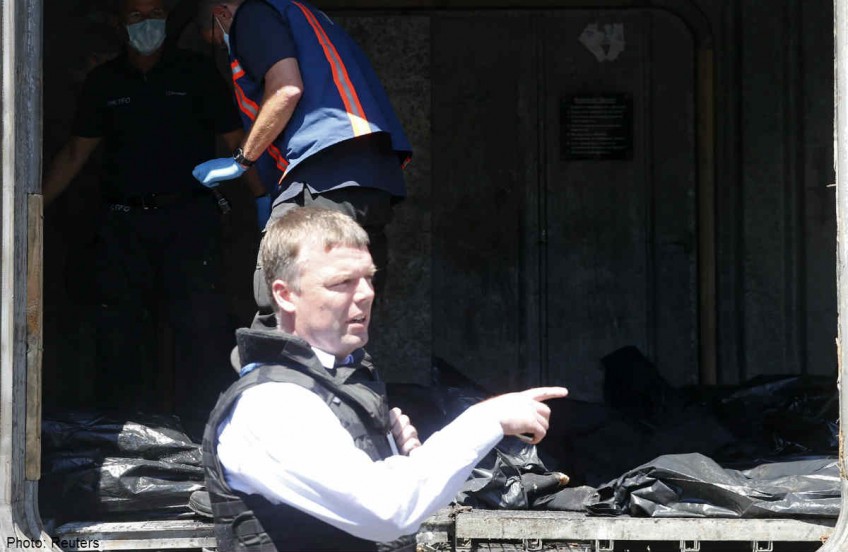 GRISLY JOB: A refrigerator wagon, which contains remains of MH17 victims, being inspected. Though kept cool, the summer heat was too strong and the smell of decay was all over the wagon.

The train carrying many of the 298 passengers killed in the MH17 disaster may have started the first leg of their journey home, but the road to closure for the victims' families remains a long one.

Consisting of five refrigerator carriages and one ordinary passenger carriage, the locomotive, which has been dubbed the train of death, departed from Donetsk, eastern Ukraine, on Monday night.

It arrived in the Ukrainian city of Kharkiv yesterday, the Interfax news agency reported.

The train pulled up at a railway station in the city, where its locomotive engine will be replaced.

It will then roll into an arms industry plant in Kharkiv, where the bodies are expected to be transferred to special containers provided by the Netherlands.

Mr Peter van Vliet and two members of a Dutch disaster victims identification team arrived at a railway station near the crash site on Monday.

They inspected the storage of the bodies in refrigerated rail cars while wearing surgical masks and rubber gloves.

Mr van Vliet and his team, who were accompanied by Organisation for Security and Cooperation in Europe observers and a heavily armed rebel escort, went through the wagons and saw that the refrigerator units had kept the wagons cool.

But even that could not protect the bodies from the summer heat and the smell of decay was all over the "morgue train" as the doors of the wagons rolled back to reveal a number of black body bags, reported the Daily Telegraph.

Nonetheless, Mr van Vliet said he was impressed by the work the recovery crews had done, given the heat and the scale of the crash site.

"I think given the conditions, the recovery operation and the storage of the bodies is very good. I have nothing to say about other things," he said.

The total number of recovered corpses is now 282, they said, leaving 16 of the 298 victims unaccounted for.

Mr van Vliet could not confirm the numbers, saying: "We cannot count them here because then I would have to walk on the bodies and that would show no respect. So my priority is to get the train somewhere we can do our work."

The transportation of the bodies came after a deal which Malaysian Prime Minister Najib Razak struck with Mr Alexander Borodai, leader of the rebel movement that controls the crash site.

Under the deal, Mr Borodai was to hand over MH17's two flight recorders to Malaysian officials and grant international investigators unfettered access to the crash site, Mr Najib announced yesterday.

"Only then can the investigation into MH17 truly begin; only then can the victims be afforded the respect they deserve. We need to know what caused the plane to crash and who was responsible for it, so that justice may be done," said Mr Najib.

Mr Najib, who worked through intermediaries to reach Mr Borodai, was a key figure in brokering the deal, according to two sources in Malaysia with direct knowledge of the negotiations.

The talks were kept under tight wraps, with Mr Najib initiating the conversation and bringing only a handful of his closest confidants into the discussions, reported Reuters.

The flight recorders will be sent to a lab in the United Kingdom, said Malaysia's deputy transport minister yesterday.

Mr Aziz Kaprawi told Reuters that the black boxes will travel directly from Ukraine to a lab under the Air Accidents Investigations Branch in the UK.

AFP reported that the first bodies from the MH17 crash will be flown today to the Netherlands, though their identification could take months.

"Tomorrow, the first plane (with bodies) will leave for Eindhoven" in the southern Netherlands, the country's Prime Minister Mark Rutte told journalists yesterday.

He confirmed that all the bodies would then flown to their respective countries.

"Preparations will be made in Kharkiv so that identification can be done in the Netherlands as well as possible," Mr Rutte said.

"As soon as a victim is identified, first and foremost, the family will be informed and no one else. That can take weeks or months."