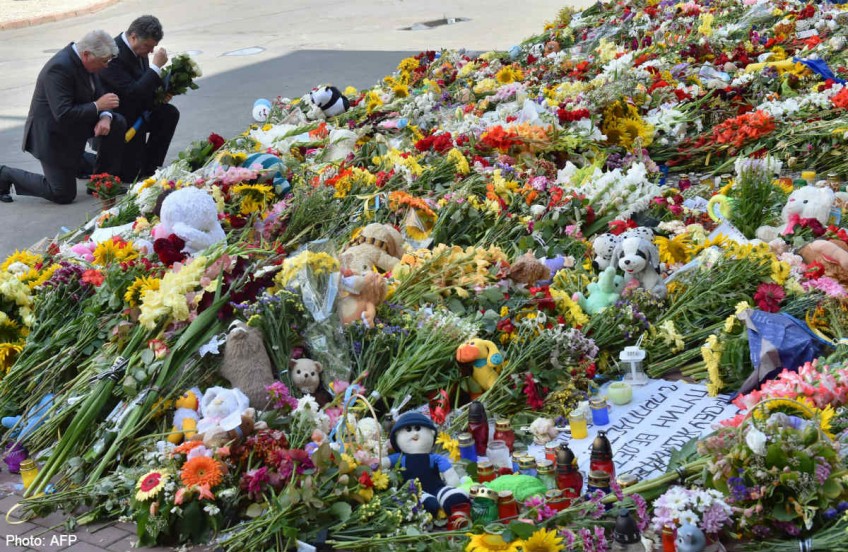 Their hopes, dreams and ambitions lay strewn among the debris of Flight MH17 in the Ukraine.

Life's journey ended far too soon for some 80 young people and children who perished in last Thursday's tragedy when the Malaysian Airlines jet was apparently brought down by a missile.

They will never know or experience adulthood, what it feels like to fall in love, get married, have children, or simply, just living a full life.

The pain of their grieving parents is reflected in Dutch father Hans de Borst's open letter to Russian President Vladimir Putin about his dead daughter. (See traslated letter on left.)

And also in the Australian couple who bade their three children farewell at the Amsterdam airport and never saw them again.

Their two sons and daughter were supposed to return to Perth, ahead of their parents, from their family holiday so they would be in time for the start of their school term, reported the Daily Mail.

But the children, who were accompanied by their grandfather Nick Norris, never made it home after boarding the ill-fated flight.

The Maslin children were among the 298 who died when MH17 crashed in Ukraine near the Russian border.

As many as 80 children were on board the plane, said Dutch Prime Minister Mark Rutte at a press conference at The Hague in the Netherlands, last Saturday.

Of these children, 23 were younger than 12 years old and three were infants, he added.

Their parents, Anthony and Rin, had planned to stay on in Amsterdam for a few more days after their children left, reported the Daily Mail.

The couple have since returned to Perth and attended a public tribute for their children at Mo's junior football club on Sunday.

The team - the Scarborough Sea Eagles Year 7 team - held a minute's silence to remember their star forward before the game.

The Daily Mail reported that Mo had planned on being there for his first game after his holiday in the Netherlands. He had played for the football club for three years.

Another Australian family of five was also on board MH17.

The deaths of Ms Shaliza Zain Dewa, Mr Johannes van den Hende and their three children - (above, from left to right) Piers, 15, Marnix, 12, and Margaux, eight - devastated the community of Eynesbury, a town 40km west of Melbourne, reported ABC News.

Mr Andrew Neal, the principal of Bacchus Marsh Grammar, which the three children attended, told ABC News that their deaths were a tragic shock.

"A wonderful group of people that have been killed in such a tragic way. The impact will be the disappearance of respected and well-loved members of our community," he said.

Piers, 15, was described as a budding goalkeeper with Melton Phoenix Football Club.

"He was an up-and-coming, really good goalkeeper (and) really passionate football player."

Among the three babies killed was 21-month-old Kaela Goes (right), who was flying home with her parents to Malaysia after visiting relatives in Holland.

Two families who lived on the same street in the Netherlands were also killed in the crash, The Daily Mail reported.

Thank you very much Mr Putin (above), leaders of the separatists or the Ukraine government, for murdering my loved and only child, Elsemiek de Borst. She was 17-years-old, a 5th year student at the Segbroek College in The Hague.

And she was on her way to her holiday in Malaysia together with her little brother, her mom (my ex-wife) and her stepfather. Elsemiek would have done her final school exams next year, together with her best friends Julia and Marina. She did so well in school. After that she wanted to go to the Delft University of Technology to study engineering. She was looking forward to it.

But suddenly she is not here any more. She has been shot out of the sky, in an unknown country, where there is a war going on.

Gentlemen, I hope you're proud to have shot her, amongst other young lives, and that you will be able to look at yourself in the mirror tomorrow morning. I hope you will receive this message, maybe translated in English.