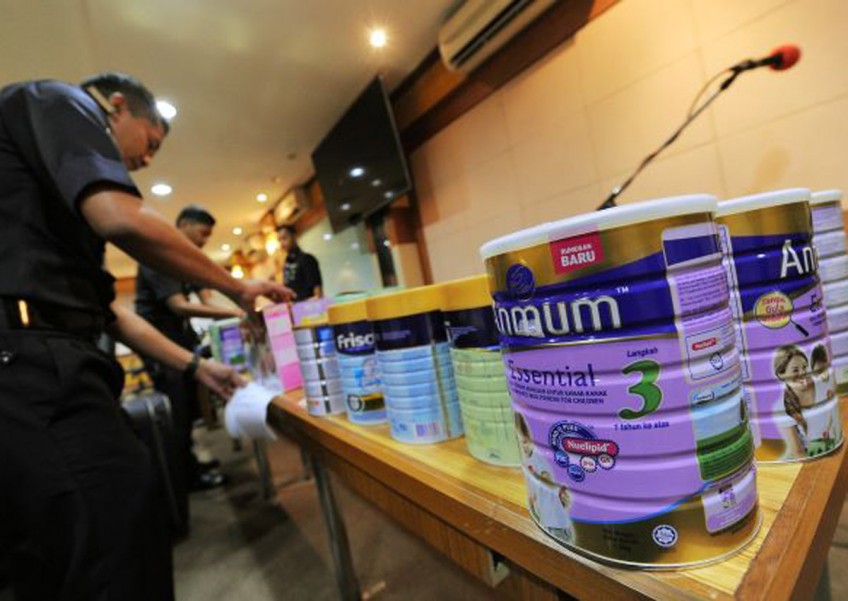 In the operation, police retrieved 21 cans and 17 boxes of baby formula.
The Star/Asia News Network

PETALING JAYA - Even a stint in prison could not wean Susu Kangkang Gang members off their ways - they went back to stealing baby formula from supermarkets again after their release at the end of last year.

Petaling Jaya OCPD Asst Comm Mohd Zani Che Din said four members of the gang, two men and two women aged between 25 and 49, were caught in the act at a supermarket in Dataran Sunway here on Wednesday night.

In the incident, one of the suspects tried to strike an officer with a metal baton as police pounced on the gang at the entrance to the supermarket.

"The gang is so named because they hide the baby formula under their clothes, in between their legs," he told a press conference on Friday.

ACP Mohd Zani said the women would enter the shops pretending to be pregnant while the men acted as lookouts.

In the operation, police retrieved 21 cans and 17 boxes of baby formula.

"The stolen items would be resold to smaller shops in neighbourhoods where the residents are mostly illegal immigrants," he said.

The case is being investigated under Section 394 of the Penal Code for voluntarily causing hurt while committing a robbery.