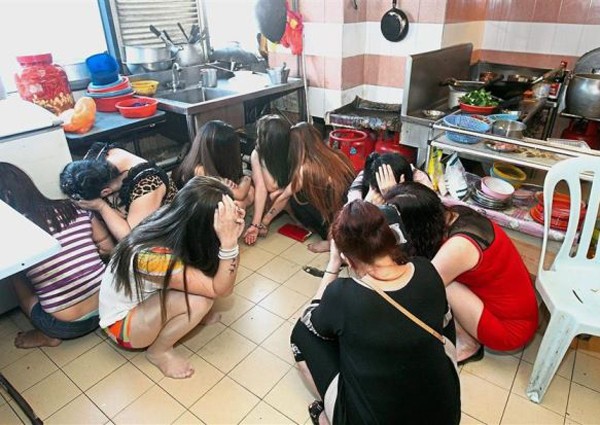 The raiding team found these foreign women hiding in a secret room in the mini casino which has arcade-style electronic gambling machines.
The Star/ANN

KUALA LUMPUR - An enforcement team hit the jackpot when it raided a "mini casino" at a complex in the city.

It not only found customers openly gambling at the machines, it also discovered illegal foreigners, dressed in miniskirts and short dresses, working there and even offering "extra services".

The surprise operation sent the foreign "guest relations officers", believed to be from China and Vietnam, scurrying to a secret room up in the ceiling to evade arrest.

The multi-agency operation, led by the Companies Commission of Malaysia (SSM), at the Electronic Ace Complex in the Pudu market area, found huge arcade-style electronic gambling machines stationed openly on the first and second floors of the building.

Some customers were playing at the machines when the authorities sprang into action at the mini casino, according to a check by The Star.

It is understood that customers would buy tokens to gamble at the machines and claim the prize money from a separate counter.

Federal Territories Immigration Department deputy director Mohd Shahrulnizam Ismail said the female foreign workers were believed to have prostituted themselves for as low as RM70 per session.

"The women tried to escape by hiding inside a concealed room in the ceiling," he said when approached after the operation yesterday.

Instead, the operators' ruse was uncovered by the team, who also found several illegal gambling machines there, he said.

Mohd Shahrulnizam said that based on intelligence gathered by the department, the mini casino was open until late every day.

"Some of the foreign women would even ask customers to take them out to a cheap hotel nearby after gambling," he added.

In all, the authorities arrested 61 individuals, mostly from Vietnam, Bangladesh, China and Myanmar, for committing offences under the Immigration Regulations and Immigration Act 1959/63 (Amendment 2002).

"We will look at whether businesses here are registered while other agencies will look at other aspects under their purview.

"The operation will be continued from time to time," he said.