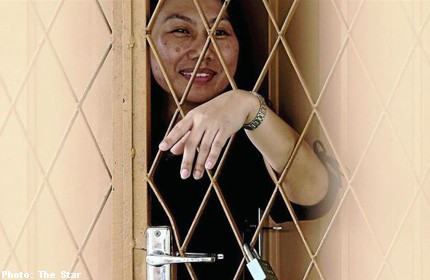 Safarela smiling while telling the pressmen that her three children were safely home at her house at Taman Meru 2B.

IPOH - The three children of Safarela Azwa Ishak who were found in a house in Rawang, more than 150km away from their home here, were taken there by their "uncle and aunt".

Safarela, 36, heaved a sigh of relief after being reunited with her three children who had been missing since Tuesday.

"They looked exhausted when I picked up them up at the Gombak district police station around midnight," she told reporters when met at her house in Taman Meru 2B here yesterday.

She said a few "good samaritans" had driven her to Gombak to fetch the children.

Safarela said she had no clue as to how the children ended up in Gombak, and would seek more details from the police in the next few days.

It was reported that Syarafuddin Syazwan, Syarir Syafi and Syauratul Syafiah left their house between 2pm and 6pm on Tuesday.

Safarela smiling while telling the pressmen that her three children were safely home at her house at Taman Meru 2B.

After a fruitless search, Safarela lodged a police report at the Jelapang police station on Tuesday night.

At that time, she said that her sister and brother-in-law had been in her house when she left for work. When she returned, she said the children were gone.

Yesterday, she declined to comment when asked whether the incident had anything to do with family affairs.

"I don't think there's a need to answer or verify what people have said about my family, and I hope the public and the media will respect our privacy," said Safarela, who did not allow the media to meet the children.

At a separate press conference later, deputy state police chief Deputy Comm Datuk A. Paramasivam said the children were found at a house in Rawang belonging to their "uncle and aunt" at about 8.30pm on Wednesday.

"Acting on police investigations and intelligence, we went to the house and found the children there," he said, adding that they were believed to have been brought there by relatives.

DCP Paramasivam said the case had been reclassified under Section 361 of the Penal Code for kidnapping from lawful guardianship, with the guilty facing a jail term of up to seven years.

He added that no arrest had been made yet.