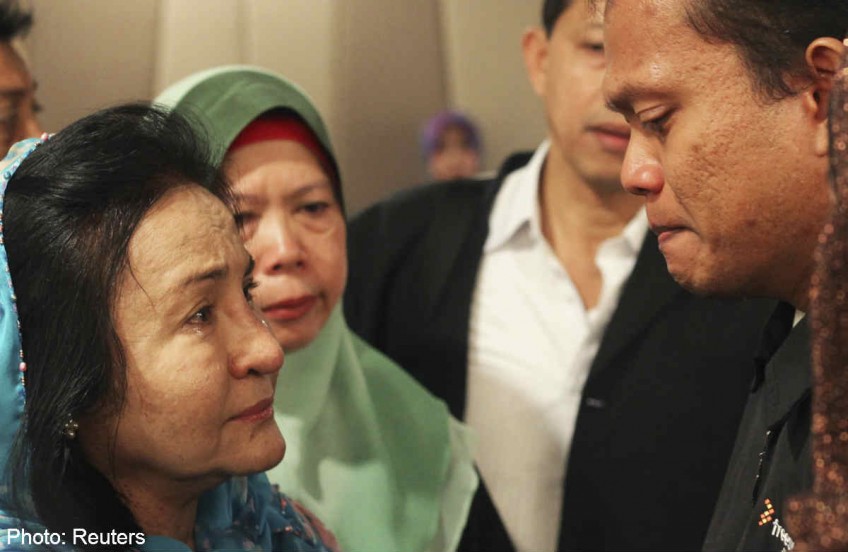 KUALA LUMPUR - Family members of MH370 crew have turned to social network to express their feelings towards their missing loved ones. The daughter of an air stewardess expressed sadness over the uncertainty of her mother's safety.

Known as Jasmine Johari on her twitter account, she began to tweet about the MAS MH370 flight around 2.27pm yesterday where she tweeted "Ya allah . Mama no word can say #PrayForMH370" and followed by "My mom i hope u safe" a minute later.

She later tweeted that she was waiting for updates of the incident and that she was missing her mother before replying to comforting tweets by other Twitter users.

She also thanked everyone for their concern and prayers for her mother and everyone on board.

"Im glad i really appreciate to who that pray for my mom and all the passengers . God bless you all . Im trying to be strong here," tweeted Jasmine, around 11.50pm last night.

At 11.48am today, Jasmine tweeted a screenshot of a Whatsapp conversation with her mother.

Meanwhile, Twitter user ?@Gorgxous_, known as only Maira, said to be the daughter of cabin crew Andrew Nari said she wanted her father to come back.

"Kenapa daddy perlu kerja semalam? Kenapa daddy tak cuti? :'( Kenapa perlu daddy? (Why does daddy had to work yesterday? Why was daddy working on that day? Why must it be daddy?)," she later tweeted at 12.08pm yesterday.

Maira was overwhelmed by the feedback from public as it opened her eyes on how kind-hearted Malaysians really are in showing their concern.

At 9.27am today, Maira hoped that people will stop spreading rumours about the MAS MH370 flight as it has affected her.

"I really do hope that people will stop spreading rumours and all those edit photos and ect or anything as it effects my feelings," she said.

She then asked for some privacy from the media as she felt very disturbed at this moment. She tweeted: "The medias..., they're very disturbing. I know that they're just doing their job, but we need some privacy."

Another relative of cabin crew Wan Swaid Wan Ismail had expressed his shock over the news where he prayed for the safety of Wan Swaid.

Izzat Nazli, on his twitter account began tweeting on 11.48am yesterday where he tweeted, "Ya Allah! My cousin is in the MH370 aircraft. Ya Allah make ease of the situation"

He later tweeted that he was waiting for news regarding the MAS MH370 flight situation at the KLIA and that, Malaysia Airlines Group Chief Executive Officer, Ahmad Jauhari Yahya had explained to family members on the current situation.

Izzat had tweeted asking for people not to spread any fake news and rumours. He also said to never lose hope.

At 3.21pm today, Izzat had mentioned that MAS staff still had no clue on their relatives' whereabouts and did not mentioned anything about the plane being hijacked.