Missing MAS flight: Pilots must have been caught offguard 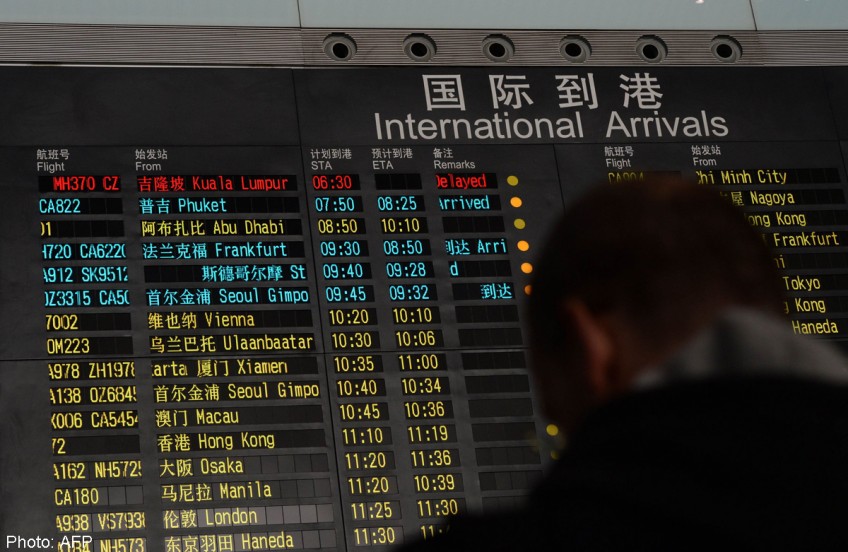 A man stands beside the arrival board showing the flight MH370 (top-red) at the Beijing Airport after news of the Malaysia Airlines Boeing 777-200 plane disapeared on March 8, 2014. Malaysia Airlines said a flight carrying 239 people from Kuala Lumpur to Beijing went missing early on March 8, and the airline was notifying next of kin in a sign it expected the worst.

A retired pilot with Malaysia Airlines said that whatever happened to the plane must have been extremely sudden because pilots have several ways of calling for help.

Retired pilot Captain Lim Khoy Hing, who flew the B777-200 for nine years, told The Star Online that they normally use VHF (very high frequency) radio communication which has a limited range of up to 402km.

For long distance communication, he said they used HF (high frequency) radio communication with a much wider range of over 1,609km. Another option was to use the Controller-pilot data link communication (CPDLC) to declare an emergency.

"The pilots would have been able to communicate and overcome range problems.

"So this tells you something must have impeded them from making the mayday call."

He said that at the reported 35,000ft that the MH370 flight had lost contact, the pilots would need around five minutes to bring it down to a safe level of 10,000ft.

Capt Lim, who retired in 2011, said that at this height, passengers would not need to use an oxygen mask, adding that this would have also given the pilots time to make the distress call.

"Pilots are trained to make the mayday call as soon as they encounter an emergency. Everyone in the same airspace on the same frequency will hear it and the first priority will be given to the plane so it can land safely," he explained.

The aircraft's disappearance happened during the safest point in the flight. This was because of several factors, including that it had been on cruise mode at a constant power and speed, he said.

"The most dangerous points in a flight is the taking off and landing because there are so many variables present. In addition, the B777-200 is one of the safest because of its modern technology."