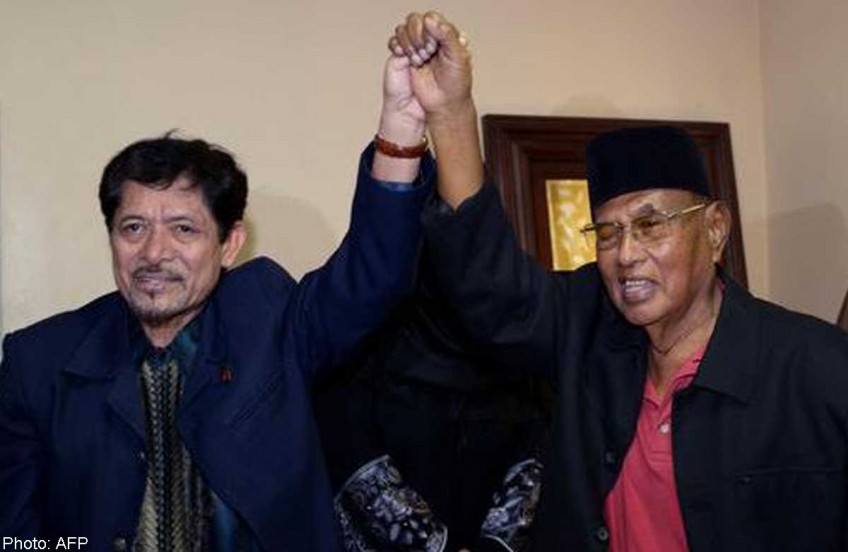 Nur Misuari (L), founding chairman of the Muslim separatist insurgent movement in the Philippines, raises the arm of the self-proclaimed Sultan of Sulu, Jamalul Kiram III (R) during a visit to the ailing sultan's home in Manila on March 5, 2013.

PETALING JAYA - A vengeful former Moro National Liberation Front (MNLF) leader may be the hidden hand behind the series of kidnappings in the eastern part of Sabah.

"We are not ruling out that he has a hand in the incident," he said via SMS. "We believe that he is amassing funds, including from ransom money to set up his own army."

Nur Misuari had on several occasions threatened to take revenge on Malaysia for handing him back to Manila after he fled the Philippines for Sabah in 2001 following a failed rebellion. Earlier reports suggested that he was working through his loyal former MNLF members in Sabah with kidnap gangs in Jolo to negotiate ransoms.

Apparently, Nur Misuari is hiding in the mountainous Patikul village in Jolo Island after his failed siege on Zamboanga.

"Our security forces will be more vigilant to detect the guerilla-like tactics used by terrorists to carry out kidnappings," Dr Ahmad Zahid said.